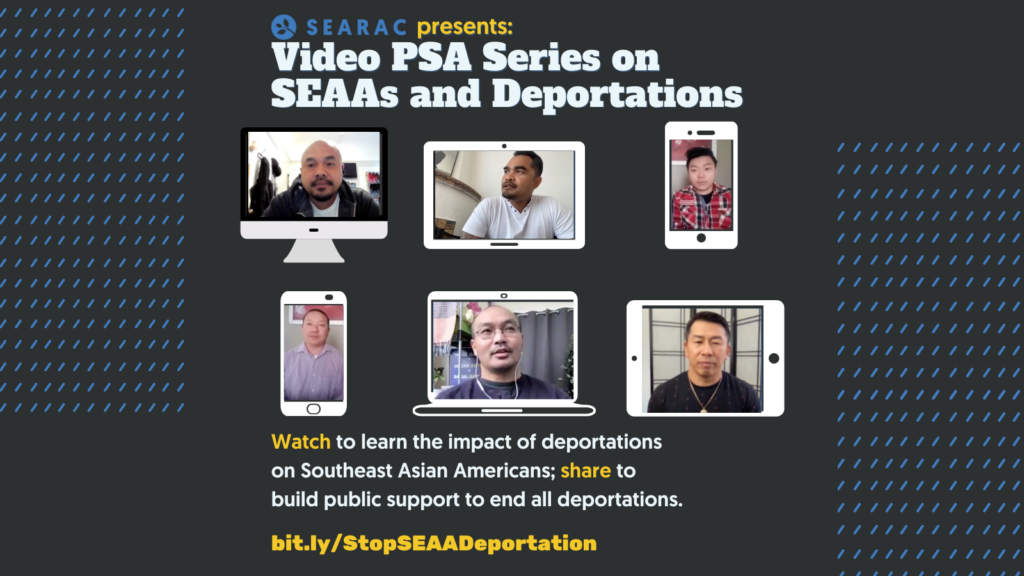 The Southeast Asia Resource Action Center (SEARAC) proudly presents a series of deportation-focused public service announcements (PSAs) featuring the stories of five impacted community members and their families. This video series is designed not only to educate the broader Southeast Asian community on the impact of deportations on our families and communities but also to build public support for the need to end deportations.

These PSAs come on the 25th anniversary of the Illegal Immigration Reform and Immigrant Responsibility Act of 1996 (IIRAIRA), which enables the mass deportation of noncitizens with who have come into contact with the criminal legal system and increases punitive measures against immigrants and refugees. Through this new series of PSA videos, SEARAC seeks to honor the individuals and communities who have been devastated by the heightened deportations of Southeast Asian Americans, a practice that began with the passage of IIRAIRA and continues today.

To watch the videos, click on any of the images below or visit SEARAC’s Facebook page. Videos will go live on September 30, 2021. 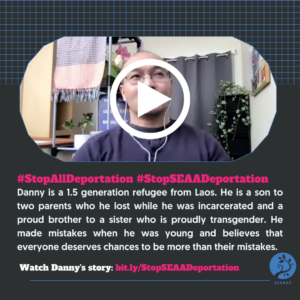 Somdeng (Danny) Thongsy, a 1.5 generation refugee from Laos. He is a son to two parents who he lost while he was incarcerated and a proud brother to a sister who is proudly transgender. He made mistakes when he was young and believes that everyone deserves chances to be more than their mistakes. He wants people to not be ashamed to ask for help, to highlight America’s systemic issues impacting Southeast Asian and immigrant communities, and to ensure that the many voices of our community are heard. 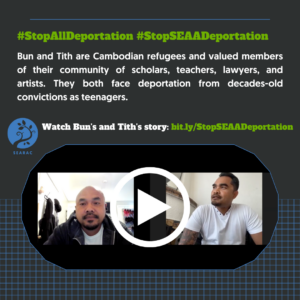 Chanthon Bun, a refugee from Cambodia, a survivor of the Killing Fields, and the current Yuri Kochiyama fellow at the Asian Law Caucus. He is a thriving community member of system impacted individuals and immigrants of all backgrounds. He also lives under the constant threat of deportation and is doing this project because he wants marginalized communities to be seen.

Tith Ton, a refugee from Cambodia. He is a new dad looking forward to raising his child and starting a new family. He feels blessed to have the opportunity for freedom and wants to make life meaningful for others. He faces deportation to a country he once fled, where he knows no one. 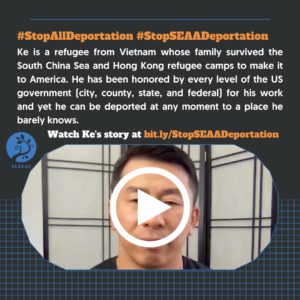 Nghiep (Ke) Lam, a refugee from Vietnam whose family survived the South China Sea and Hong Kong refugee camps to make it to America. He is a member of a resilient and kind community of formerly incarcerated individuals, artists, queer leaders, and members of community organizations. He is doing this project in order to help give voice to the thousands of people fighting for their freedom to be accepted as citizens. He has been honored by every level of the US government (city, county, state, and federal) for his work and yet he can be deported at any moment to a place he barely knows. 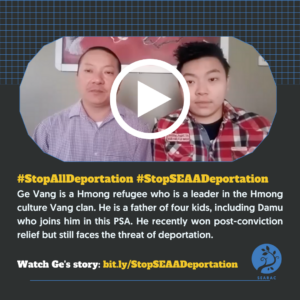 Ge Vang, a Hmong refugee who is a leader in the Hmong culture Vang clan. He is a father of four kids, including Damu who joins him in this PSA. He recently won post-conviction relief but still faces the threat of deportation. He wants people in similar circumstances to understand that they are not alone and that there are communities that want to help.

Deportations tear families apart, weaken and traumatize communities, and leave lasting, intergenerational wounds that negatively impact our health, wellbeing, and economic security. Our hope is that the personal stories uplifted in these PSAs will shine a light on the injustice and cruelty of the United States deportation machine and build a wave of support for ending deportations of Southeast Asian Americans and all immigrant and refugee communities.

The New Way Forward Act (H.R. 536) provides a bold vision of what our immigration system should look like, one that does not rely on mass criminalization, detention, or deportation. New Way Forward repeals some of the worst provisions of the 1996 immigration laws that are directly responsible for expanding the incarceration of immigrants, creating a fast track for deportations without due process, setting the foundation for local police and ICE collaboration, and cementing the pipeline from arrest to deportation. If you are moved by the stories from this series of deportation PSAs, we encourage you to contact your Members of Congress and urge them to co-sponsor the New Way Forward Act.

You can also help us spread the word about these PSAs using our social media toolkit found at bit.ly/StopSEAADeportation-Toolkit