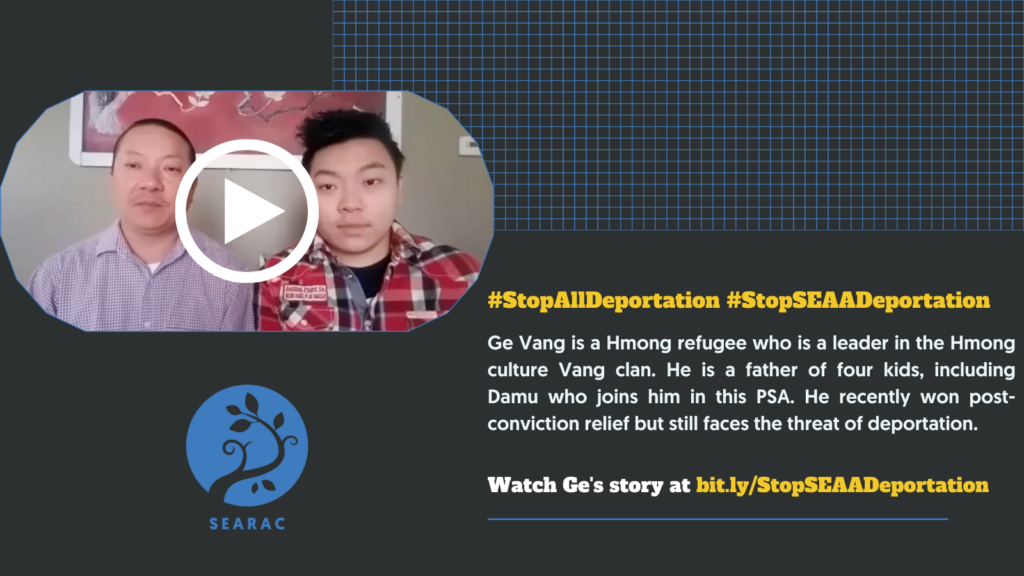 Ge Vang was born in a Thai refugee camp in 1978 as the fourth of five children whose father fought alongside American troops as a captain under General Vang Pao in the Vietnam War. His two oldest siblings passed away during the War. In August 1978, when Ge was eight months old, he and his family arrived as refugees in Houston, TX. Eventually, they settled into affordable housing in St. Paul, MN, where some of Ge’s relatives lived.

“I remember growing up there, we didn’t have any programs or any mentor,” Ge said. “I was pretty much on my own to figure [out] who to become. All the friends and people you look up to were in a gang.”

Ge recalls a difficult childhood. His two older sisters would go to work with his parents at a garden, and another would babysit him and his younger sister. School was something he had to navigate on his own because his parents did not know English. Today, Ge can still remember his ESL teacher pinching him on his arm and calling him stupid because he couldn’t learn English quickly enough.

Ge was placed in a class for students with learning disabilities, even though he doesn’t have such conditions. Academics quickly became too hard for him to keep up, so he started skipping class and joined a gang.

“There are days when my wife and the kids want to go or do fun things but the fear always play a role in the decision making: “Don’t waste money!” It’s hard to overcome this type of fear unless laws change.”

On an unusually hot January day in 1996, a week after Ge turned 18, he drove his father’s van to pick up his girlfriend (who is his wife today), and then they picked up two more friends. They noticed a rival gang, and Ge’s friend in the backseat waved a gun at them. His subsequent arrest and 365-day sentence broke his parents’ hearts. His mom would cry all the time.

“Being incarcerated was like hell. It was complicated and real stressful to stay in there, but I have no choice — with all the time in the world trying to figure out how to be a better person,” Ge said.

“My first child was the turnaround for me. I never understand what my parents used to say to me when I [gave] them a hard time. So now I have one of my own, and I know. My parents are great, and I try to be like them.”

Ge lives in constant fear of one day being deported to a country to which he has no ties. He doesn’t speak the language, and he has no family living there. He knows there would be no job prospects other than ones that are too labor-intensive for someone his age. His kids would grow up without a father, and he would need to start a life he doesn’t want, all over again. This fear of sudden deportation permeates his family’s daily lives.

“There are days when my wife and the kids want to go or do fun things but the fear always play a role in the decision making: ‘Don’t waste money!,’” Ge said. “It’s hard to overcome this type of fear unless laws change.”

Ge urges legislators to pass post-conviction relief so that he can challenge his deportation. He wants to tell them that, like many Southeast Asian American community members, most of their encounters with the criminal legal system were made when they were very young without education or a mentor.

“I’m sharing my story because there are a lot of people like me who are in this situation, who are left out in the dark for so many years, and for people who don’t think that it was just a mistake at a very young age. If I can change back the hands of time, education and knowledge would be the best for any young person trying to figure themself out.

Please be aware that I am still human even though I made a mistake in the past. I do have family that loves me, and I love them, too.”

Take action and urge your members of Congress to support the New Way Forward Act, which would provide relief to Ge and his family. A digital toolkit is available here. It includes SEAA stories, graphics, quotes, and other advocacy tools that you can use to encourage your reps to co-sponsor the bill.

UPDATE: After 18 months of advocacy, an immigration judge granted Ge Vang relief, terminating his deportation order on July 19, 2021. “I feel like I can finally breathe because I no longer have to live in fear of being deported to Laos, a country I know nothing about,” Vang expressed. Read more in this press release from CAAL-MN.