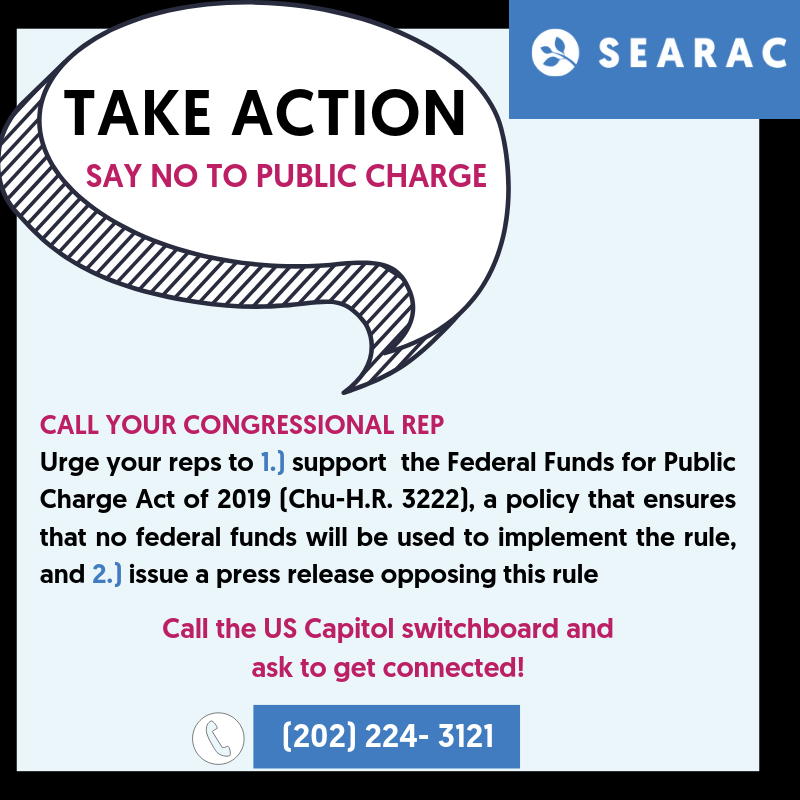 SEARAC condemns the Trump Administration for finalizing its “public charge” regulation. The new policy, scheduled to go into full effect on Tuesday, Oct. 15, 2019, forces immigrants to choose between accessing critical government services and programs they need to survive and protecting their ability to obtain a green card. By penalizing immigrants for using programs, such as non-emergency Medicaid, supplemental nutrition assistance program (SNAP or food stamps), and housing assistance (public housing, Section 8 housing vouchers, and rental assistance), the country is putting the health and well-being of thousands of vulnerable families and children at risk.
SEARAC, along with immigrant communities across the country, have been working this past year to oppose this policy change, which is likely to drive up poverty, hunger, and unmet health care needs. For Southeast Asian Americans (SEAAs), this policy will most likely harm low-income immigrants who arrived to the United States through the family visa program. In 2016, 87% of immigrants from Cambodia, 96% from Laos, and 97% from Vietnam who received a green card were able to do so due to a family-based visa petition.
“This inhumane proposal by the Trump Administration is an attack to America’s historical legacy and commitment to welcoming immigrants of all backgrounds,” said Quyen Dinh, executive director of SEARAC. “This is not the America that welcomed my parents as refugees decades ago and showed compassion to many other low-income SEAA immigrants that I grew up with in my community. No one should have to choose between living and thriving in this country. We strongly condemn this Administration’s despicable efforts to hurt immigrant families across the country and urge our congressional leaders to stand with our communities today.”
SEARAC will continue to monitor the rollout of this policy and will share relevant analysis and resources as they become available.

1. Call your congressional representative to:

3. Weigh in on social media –  When proposed last year, this regulation drew more than 266,000 comments overwhelmingly in opposition, including the 600+ comments collected through SEARAC with your support. Continue to voice your opposition using this social media guide from the Protecting Immigrant Families campaign.

4. Share your story – If you or someone you know would potentially be harmed by this regulation, consider sharing your story with us by contacting SEARAC Director of National Policy Katrina Dizon-Mariategue at katrina@searac.org.