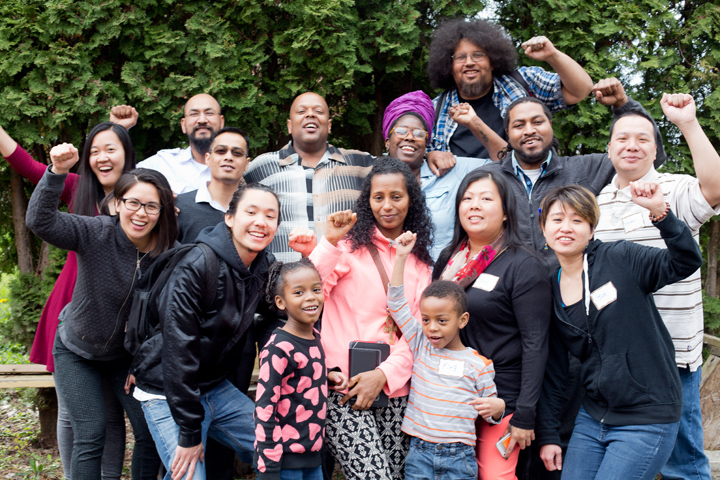 The Trump administration continues to attack immigrant and refugee communities. This recent attack, through a proposed expansion of public charge determination, has the potential to harm low-income immigrant communities, in particular. Here’s what you need to know to protect your family and fight back!

5. Take Action!
-How to join the campaign

Public charge is a test used to determine if a person seeking admission to the United States or wanting to obtain a green card while in the country is likely to rely on government services for support.

When a person in the United States applies for a green card, the application information, along with an interview by immigration officials, determines if a person is likely to rely on government services for support. If a person is considered a public charge, he or she may be denied a green card.

Currently, the only government benefits considered in the public charge determination are:

Receiving public benefits does not automatically make an individual a public charge. Additional factors must be considered:

Note: Changes are already in effect to the public charge determination for those seeking to enter the United States.

The Trump Administration wants to redefine the public charge determination for people seeking a green card in the United States. The major concerns for the Southeast Asian immigrant community are changes seeking to:

Impacted: the following individuals are greatly impacted by this proposal

Exemptions: the following individuals are exempt from the determination

While refugees are exempt from public charge determination, low-income SEAAs arriving here through family visas will likely be the most vulnerable to this proposed rule.

Many SEAAs residing in the United States have become naturalized US citizens and lawful permanent residents who are able to sponsor their families to reunite with them. In 2016, more than 90% of immigrants from Cambodia, Laos, and Vietnam who received a green card were able to do so due to a family-based visa petition.

Since SEAAs rely heavily on programs like SNAP and Medicaid, this rule may force families to choose between their health and protecting their immigration status.

Who is impacted by the new proposed public charge rule?

NOTE: Refugees and asylees are NOT impacted by this proposal.

Will I be considered a “public charge” if I used benefits in the past?

The rule looks forward. Benefits, with the exception of cash or long-term care at government expense, used before the rule is final and effective are NOT considered in the public charge determination. All benefits received after the rule are considered.

Do the proposed changes impact my eligibility to apply for government benefits?

No. The proposed changes have no bearing on an individual’s eligibility. However, families may have to make tough decisions between their ability to adjust their immigration status or accessing critical benefits for their family’s survival.

If the rule becomes law, should I disenroll from benefits?

You must consider what is in the best interest of you and your family. If the rule is finalized, there will be at least 60 days before the rule is effective. During that time, you will have an opportunity to decide whether to discontinue your benefits.

If family or household members use government benefits, will it be considered in the public charge test if I apply for a green card?

No. In the proposed rule, only the use of benefits by the person applying for a green card is taken into consideration.

If my parents are considered a “public charge,” and I’m a dependent/minor, would that affect my ability to get a green card as well?

Yes. Minor children derive their permanent resident status from their parents. If a parent is unable to obtain a green card, children under 18 will not be eligible either.

If other household members are on these programs, will it weigh negatively against me?

No. Additional household members have no bearing on a person’s public charge determination card. Only the applicant’s use of benefits are considered.

Does the public charge test apply if I am renewing my green card?

No. A person’s lawful permanent residence does not expire when the green card expires.

What if I am undocumented?

If you are undocumented, you are not eligible for many government benefits. However, your US citizen children are eligible. You need to provide information about your child’s citizenship or immigration status. You do not have to provide your immigration status or the statuses of other household members.

Can a person be deported if he or she becomes dependent on public benefits?

In extremely rare circumstances, a person who has become a public charge could be deported. These rules are very narrow and have almost never been applied. The proposed rule does not change or expand this rule.

SEARAC joined the Protecting Immigrant Families National Campaign to fight against this harmful proposal. Our goal is to collect at least 1,000 comments from community members and supporters across the country. There are several ways to engage.

1. Submit a comment. Tell the Administration you oppose this harmful proposal. A template letter is provided. If possible, edit the template and add your personal story. We want to collect as many unique comments as possible.

2. Educate and engage your network. Encourage others to submit a comment.

3. Send an email or text message to their friends and family.

4. Post to social media  Share your story. If you or a family/community member are an immigrant that will be hurt by this regulation, please consider sharing your story. Your story is your voice! Contact monica@searac.org to connect with someone from our team.

*Scripts, images, and tweets are provided in the social media section

1. Collect comments. Print this form and have those who visit your organization review the comment and provide their name, email, and zip code. You can scan and email the form to monica@searac.org. SEARAC will submit the comment on your behalf.

3. Post on social media. Images, below, are provided so that you can share on your organization’s social media pages.

Email
I joined a national campaign to fight against the Trump Administration’s most recent attack on our immigrant communities. The Administration is proposing a regulation that would make it harder for us to reunite with our family and become lawful permanent residents of this country. The goal is to collect 1,000 comments by December 10, 2018. If you’d like more details about this harmful regulation, click here. If you want to comment now, follow this link. There is template comment already provided for you, but feel free to edit.

Text Message
I need your help! I joined a national campaign to fight against the Trump Administration’s recent attack on our immigrant and refugee communities. The goal is to collect 1,000 comments opposing this attack on future immigration by December 10, 2018 Comment now at bit.ly/SEARACPublicCharge.

Email
I joined a national campaign to support Southeast Asian Americans and other immigrant communities who are fighting against the Trump Administration’s recent attack. The Administration is proposing a regulation that would make it harder for them to reunite with their family and become lawful permanent residents of this country. The goal is to collect 1,000 comments by December 10.

Ready to comment? If you want to comment now, follow this link. There is a template comment already provided for you, but feel free to edit. Please join me in standing with other communities of color.

“Where you see wrong or inequality or injustice, speak out, because this is your country. This is your democracy. Make it. Protect it. Pass it on.” – Thurgood Marshall

Text Message
Please join me in supporting Southeast Asian Americans and other immigrant communities fighting against the Trump Administration’s attack. There is a proposed regulation that would make it harder for them to reunite with their family and become lawful permanent residents of this country. The goal is to collect 1,000 comments by December 10. Comment now at bit.ly/SEARACPublicCharge. #weareonenation

Email
[Organization Name] is part of a national campaign to fight against the Trump Administration’s attack on immigrant communities. There is a proposed regulation that would make it harder for us to reunite with our families and become lawful permanent residents of this country. The goal is to collect 1,000 comments from the Southeast Asian American community to oppose this harmful regulation. The deadline is December 10.

3. Learn more about the specific impacts on immigrant communities by reading a resource from SEARAC.

Text Message
Help [Organization Name] fight against the Trump Administration’s attack on our communities. The Administration has proposed regulation that would make it harder for immigrant communities to reunite with their families and become lawful permanent residents of this country. We want to collect 1,000 community comments by December 10. Comment now at bit.ly/SEARACPublicCharge. 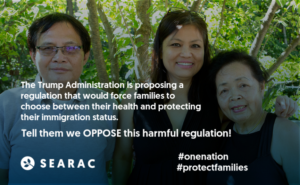 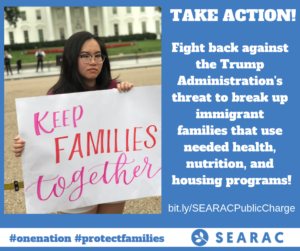 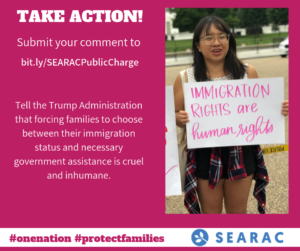 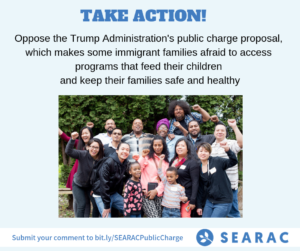 .@DHS wants to expand public charge determination for immigrants. Help @SEARAC send a loud and clear message to rejecting this BAD idea. #AAPI and #SEAA communities have a right to be seen and heard. #ProtectFamilies #OneNation Speak up! bit.ly/SEARACPublicCharge

.@OMBPress, an expansion of public charge determination on immigrants would harm #AAPI and SEAA communities. Let@DHS know we stand to #ProtectFamilies as #OneNation. Speak up! @SEARAC: bit.ly/SEARACPublicCharge

It will only take a minute to tell @OMBPress that the @DHS’s proposal to expand public charge determination harms #AAPI and SEAA communities.#ProtectFamilies #OneNation @SEARAC: bit.ly/SEARACPublicCharge

Feeling informed and knowledgeable about public charge? Submit your comment using the form below! 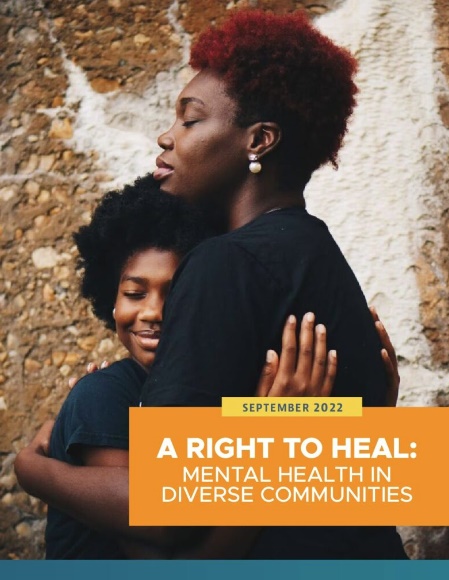 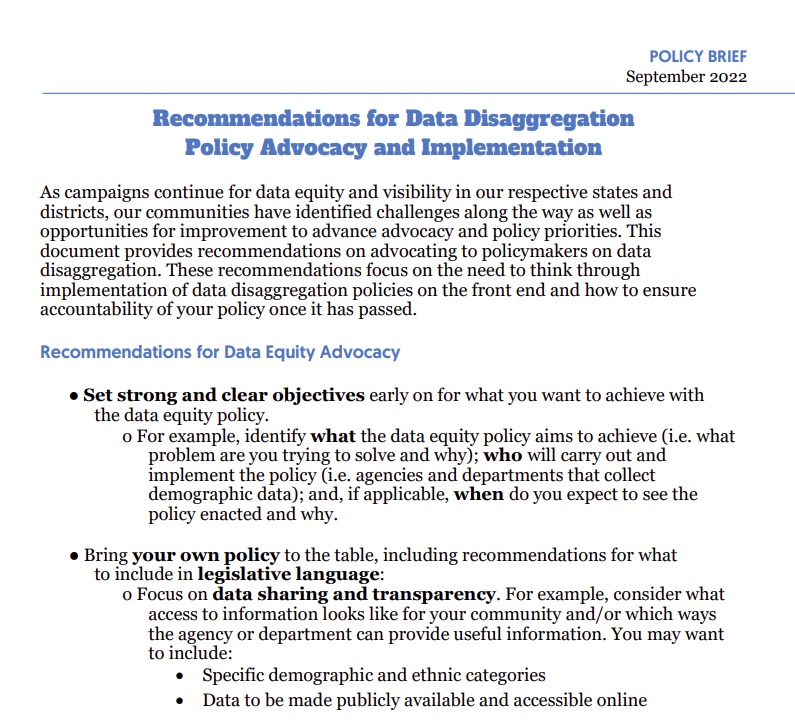