We are drawing closer to the Biden Administration’s 100th day in office, and SEARAC is committed to sharing updates on policies and actions that impact Southeast Asian Americans. If you have questions or want to learn more about any of the policies that SEARAC is tracking, contact National Policy Director Kham Moua at kham@searac.org. 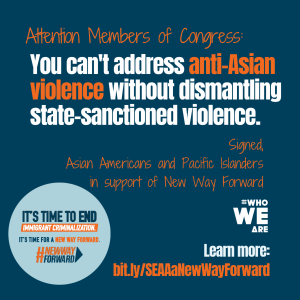 AAPI organizations across the country are holding a digital week of action Monday, March 22 – March 26. SEARAC has teamed up with community organizations from across the country to spotlight the different ways Asians and Pacific Islanders are impacted by immigration policies, including the lack of immigration status or temporary status, the public charge rule, deportation orders, and long wait times to sponsor family members. Together, we are watching the Biden Administration and Congress to ensure that our communities’ needs are a top priority. SEARAC will be leading the call to action in support of the New Way Forward Act, which directly impacts our Southeast Asian American, immigrant and refugee communities. Join us tomorrow from 2 – 4 pm EDT by using SEARAC’s New Way Forward Toolkit to call on Members of Congress to support this important legislation.

President Biden signed the American Rescue Plan Act into law on March 11th. The bill is a $1.9 trillion package that will provide additional relief for millions of individuals, increase funding for schools to address learning loss, decrease barriers to healthcare, and support state, local, and tribal governments, including $1,400 direct payments, $130 billion for K-12 schools, and subsidies to health insurance premiums through the Affordable Care Act marketplace. However, despite the robust nature of the bill:

Shortly after the passage of the American Rescue Plan into law, the US Department of Education (ED) announced states’ allocations, to be distributed starting this month, of the $122 billion to reopen schools safely and address disruptions to teaching and learning due to the COVID-19 pandemic, particularly for the students who were most impacted. SEARAC applauds ED for moving with urgency to respond to our students’ needs. We also urge ED to provide clear guidance to states and districts regarding how they should use the emergency funds to advance equity. Flexibility for states does not always result in equitable outcomes for marginalized children, including SEAAs. ED should demonstrate leadership to ensure equity.

The Biden Administration has withdrawn the federal government’s appeal to overturn a previous court ruling vacating Donald Trump’s public charge rule. The Supreme Court has also dismissed the government’s appeals, effectively voiding the public charge policy. This means that immigrants and their families can immediately utilize existing health, nutrition, and housing programs without fear of reprisal from the federal government. Read our full statement here.

On Monday, March 15, Immigration and Customs Enforcement (ICE) deported 33 Vietnamese Americans. SEARAC opposes these deportations and calls on the Biden Administration to take immediate action to stop further removals of Southeast Asian refugees. The ongoing state violence against our communities continues to perpetuate harm against our families and furthers the narrative that immigrants are undeserving of second chances. Given the recent confirmation of Secretary Mayorkas to the Department of Homeland Security (DHS), we urge Secretary Mayorkas to abide by the intent of President Biden’s 100-day moratorium on deportations and order ICE agents to halt all removals through the 100-day period. In response to these removals, Rep. Alan Lowenthal (CA-47) sent a letter to President Biden raising concerns regarding the removal Vietnamese refugees who arrived in the United States prior to July 12, 1995.

The House of Representatives passed the American Dream and Promise Act on Thursday, March 18. The bill would provide a pathway to citizenship for young undocumented individuals eligible for the Deferred Action for Childhood Arrivals (DACA) program and recipients of Temporary Protected Status. Over 100,000 Vietnamese Americans are undocumented, and over 7,000 individuals are eligible for DACA.

However, despite the positive components of the bill, it also includes unnecessary criminalization language allowing status to be denied to individuals with certain convictions as a minor and for affiliation with gangs without requirement for a conviction. SEARAC applauds the efforts of Rep. Chuy Garcia and more than 45 members of Congress who supported his amendment to remove that exclusionary language. Although the amendment was ultimately withdrawn, it showed broad support for immigration legislation that does not leave refugees and immigrants with a criminal record from support and relief.