From Vietnam to Utica and back again: Reflecting on my refugee journey

There were no helicopters, boats, or military personnel when my mother and I left Vietnam for America. Instead, there were two white International Office of Migration bags, two suitcases of clothing, and two plane tickets from Saigon, Vietnam, to Syracuse, New York.

We resettled in Utica, New York, in 2001, joining my grandparents, who resettled in 1994. People always wonder why members of my family, especially my mother and I, resettled so late compared to the droves of Vietnamese that left Saigon immediately after 1975.

During what Americans remember as the “Vietnam War,” and the Vietnamese remember as the “American War,” my grandfather worked for the governments of the Republic of Vietnam and United States doing intelligence work, mainly mapping the Ho Chi Minh Trail. The rest of my family was engaged in democratic activism. After Saigon fell, my grandparents and eight of their children—with the exception of my mother, who was one year old—were sent to reeducation labor camps for nine years to atone for their wartime allegiances.

This experience would make them distrustful of all government and jade their relationship with politics and activism. Thus when my grandfather was offered the chance to resettle in the United States by the United Nations, he opted to wait. Part of him remained patriotic, patiently yearning for a reunited and democratic Vietnam, but the larger part of him was afraid of the unknown. He waited until one of his friends, resettled on the other side of the world, confirmed that the opportunity to continue building a life from the disjuncture of an old one was not too good to be true. He followed.

Utica, New York, was—and still is—an ideal place for refugee resettlement with its cheap housing, entry-level jobs, and welcoming ethos. I had a worldly upbringing amongst a diverse refugee population (more than 47 languages were spoken at my high school!) that has made me conscious of and curious about borders, mass displacement, and the urgency of refugee resettlement.

Growing up, I was aware that I fit the legal category of “refugee.” However, my family’s assimilationist attitudes borne of their past persecution prevented me from engaging with questions about what this distinction really meant and its historical relationship to Vietnam. Becoming a naturalized citizen in 2012 and imagining an American future without understanding my Vietnamese past did not offer any answers. These two modalities of citizenship and identity seemed mutually exclusive at the time. 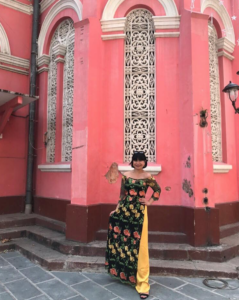 I became deeply involved in activism during my high school years, working as an advocate for refugee and immigrant public education issues. However, it was not until college that I would think critically about my identity. Taking classes on migration, citizenship, and civil war prompted me to ask about my family’s fraught history in Vietnam, engage with Vietnamese literature, and return to my homeland for the first time in nearly a decade. In effect my activism began to complement my studies. Today my work centers on decriminalizing immigration, ending detention and deportation, keeping families together, and building sanctuaries.

The past wars in Vietnam and other Southeast Asian countries cannot be extricated from contemporary discourse about refugee and immigration policy. Though U.S. involvement in Southeast Asia ended in the 1970s and 1980s, the diasporas it has created live on. Most precarious are the fates of former refugees who are currently being detained and deported to countries from which they fled decades ago. Their plight makes it clear that to be Southeast Asian in America means being the inheritor of intertwined and conflicting histories continually mediated and adjudicated through immigration policy decisions.

I am an immigration policy intern at SEARAC because I am optimistic that we can collectively build an American future that redeems the past for Southeast Asians and for all refugees and immigrants.

Trinh Q. Truong is a community activist and political theory student at Yale, where she is enrolled in a multidisciplinary human rights program. She is working at SEARAC this summer as an immigration policy intern.