SEARAC Commemorates the 40th Anniversary of the Refugee Act of 1980

Today, SEARAC celebrates the legacy of the Refugee Act of 1980, which resettled more than 1.1 million Southeast Asian Americans (SEAAs) — the largest refugee community to ever resettle in US history1 after decades of the US-backed war in Vietnam, the Secret War in Laos, and the bombings of Cambodia, followed by the ruthless Khmer Rouge-orchestrated genocide. The historic signing of this bipartisan bill symbolizes America’s humanitarian leadership and commitment to the protection of refugees fleeing persecution in their homelands.
Made possible through the work of SEARAC founders who advocated for its passage, the Refugee Resettlement Act of 1980 was pivotal in its creation of a comprehensive and unified system of refugee resettlement for the first time in history. This led to an increase of individuals that the United States admitted into the country under refugee status. It also created the first statutory basis for asylum. Prior to its passage, families who survived the worst atrocities were scattered across the country, with little to no support. This landmark policy is the reason that millions of SEAAs now call this country home.
One of those individuals is Sunny Chanthanouvong, who was born in Pakse, Laos, and lived in the Napho Refugee Camp in Thailand for four years after fleeing the bombing campaign in his country. As a teenager in the camp, Sunny had to adapt quickly, working roles as a water retriever, stove wood collector, and security guard. “There was fighting, hunger, sickness; people did what they could do to survive,” he said. In December 1983, Sunny received permission to resettle in Minneapolis after being sponsored by his dad’s friend. After having just six months in Napho to learn English, Sunny and his family flew to Minneapolis, MN, on June 18, 1984. Sunny struggled to adapt to his new life. He had to continue his education at a high school after four years of no school and a limited English proficiency. 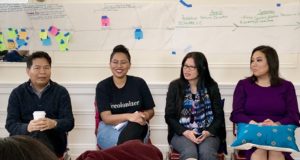 Today, Sunny is the executive director of the Lao Assistance Center of Minnesota, where he has worked since 1992 after initially running the center’s youth program. In his current role, Sunny maintains and oversees the organization as a whole, from administration to programming to day-to-day operations. You can read more about Sunny’s story in our recently launched demographic report, Southeast Asian American Journeys: A National Snapshot of Our Communities. 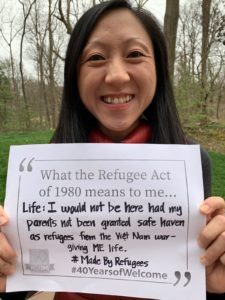 “This year marks 45 years since the United States opened its doors to Southeast Asian refugees, seeking safety,” said Quyen Dinh, executive director at SEARAC. “This was largely due to the historic changes to our country’s commitment to refugee resettlement made possible by the Refugee Act of 1980. The anniversary of this historic law is so important to remember in this moment in time when refugees and asylum seekers — individuals who risked their lives to be free — are demonized and excluded. It is our nation’s moral responsibility to continue upholding our values of freedom and safe haven, rather than turn our backs on suffering children and families who are simply seeking freedom from terror and distress. Now is the time to remember who we were as nation when we originally passed this law. Now is the time to celebrate and uphold our legacy as humanitarian leaders.”
CITATION
1. Office of Refugee Resettlement. 1982-2001. Annual Reports to Congress (Fiscal Years 1981-2000). Washington, DC: Office of Refugee Resettlement, Administration for Children and Families, U.S. Department of Health and Human Services.
Media contact:
Elaine Sanchez Wilson
elaine@searac.org / (202) 601-2970