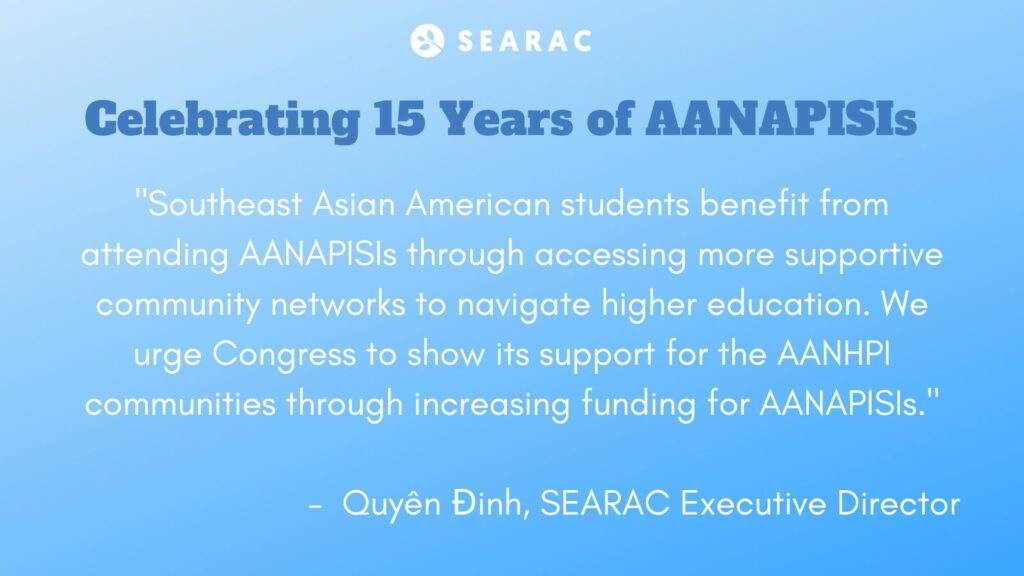 SEARAC was at the table with national partners in creating the AANAPISI program. Over the years, SEARAC has remained a steadfast champion for increased support for AANAPISIs and for increasing access to higher education for Southeast Asian Americans. While AANAPISI campuses make up only 6.1% of all U.S. colleges and universities, they enroll nearly half of all AANHPI students in the country.

“Accessing higher education continues to be out of reach for many first generation students, English learners, and students of color, especially within the Southeast Asian American community,” Quyên Đinh, SEARAC’s Executive Director stated. “Southeast Asian American students benefit from attending AANAPISIs through accessing more supportive community networks to navigate higher education. We urge Congress to show its support for the AANHPI communities through increasing funding for AANAPISIs, which continues to be the lowest funded Minority Serving Institution programs in the United States.”

“One of the great untold stories in the 1990s was the lack of equity in higher education being experienced by Pacific Islanders and Southeast Asian Americans,” said Congressman Robert Underwood, who championed the AANAPISI program during his time in Congress. “This reality provided additional energy to seek legislation which established federal recognition of universities and colleges which served Asian Americans and Pacific Islanders. The broader Asian Pacific American community needed to be recognized in higher education legislation so that higher education opportunities would be extended to this community. In turn, the country would be stronger and truer to its principles. The struggle for recognition continues, but the faces of those activists in the Southeast Asian and Pacific Islander communities in the 1990s are fresh in my memory and gave us the initial boost.”

“It is time to celebrate the achievement of 15 years of AANAPISIs, a program created by and for our AANHPI communities,” shared KaYing Yang, former SEARAC Executive Director and a member of President Biden’s Advisory Commission on Asian Americans, Native Hawaiians and Pacific Islanders (PACAANHPI). “Our Southeast Asian American communities continue to face persistently higher levels of trauma and poverty and lower levels of matriculation into colleges and universities, where they may continue to face social, financial, and racial barriers. AANAPISIs help to alleviate these barriers by enrolling higher rates of underrepresented groups within AANHPI communities and creating space with opportunities and equity for AANHPIs in mind.”

To learn more about AANAPISIs and AANAPISI Week, visit the APIA Scholars website, where you can also sign onto a letter requesting more funding for these institutions in FY23 appropriations. You can also learn more about the unique educational needs of Southeast Asian Americans on SEARAC’s website.