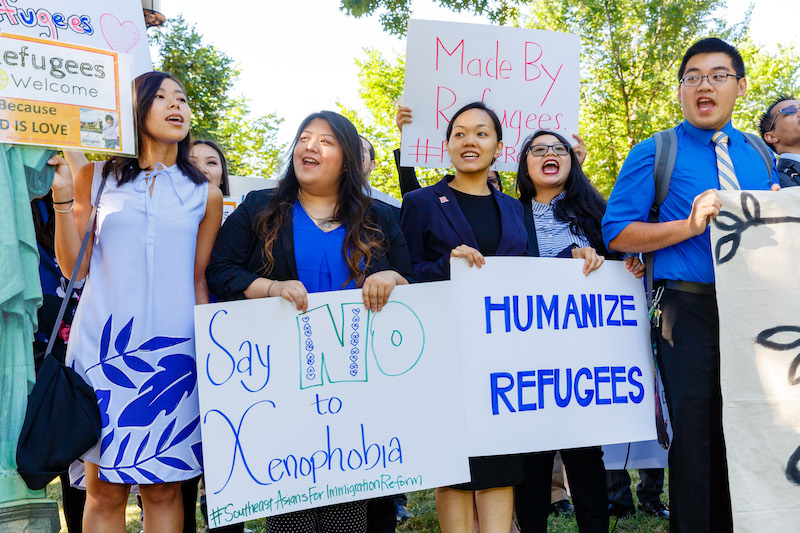 WASHINGTON, DC – Last Wednesday, Reps. Pramila Jayapal (WA-7) and Adam Smith (WA-9), and Sen. Cory Booker (NJ) reintroduced the Dignity for Detained Immigrants Act, legislation that would repeal mandatory, arbitrary, and indefinite detention, phase out private detention facilities, require the establishment of detention standards and improve oversight, and establish program alternatives to costly detention.
Since 1998, more than 16,000 Southeast Asian Americans have been issued final orders of removal, but due to the unique relationship between the United States and Cambodia, Laos, and Vietnam, many are detained for prolonged periods of time as the US government tries to deport them.
Nam Nguyen is one individual who endured prolonged detention as a result of these policies. He was only 8 years old when he fled Vietnam by boat and spent several years in refugee camps before he was sponsored to live in the United States. He entered the country as an unaccompanied child, seeking asylum with no parents to care for him. After spending several years being transferred from one group home to the next, Nam settled and grew up in a low-income neighborhood in Southern California, where he struggled to adjust without strong role models or guardians in his life.
When he was 17 years old, Nam and 11 other people were pulled over and charged for assault with a firearm. Nam was advised to plead guilty, without understanding that a guilty plea could later result in deportation. He served his time and was placed on probation. In 1997, Nam was paroled, but he was immediately detained by Immigration & Customs Enforcement (ICE). The detention was indefinite – four years later a Supreme Court decision mandated his release.
“I still remember vividly the terrible conditions that we were subjected to under ICE detention,” Nam recalls. “We were abused, harassed, and targeted by both fellow detainees and ICE correctional officers for being ‘indefinite lifers.’ We were transferred multiple times, subjected to racial slurs, and denied basic hygiene needs and food. We were forced to sleep in concrete holding cells with no blankets. And worst of all, we had no way to complain or file grievances for fear of retribution. Looking back, I am so remorseful for all I have done, and I take full responsibility for my past actions. But none of us deserved that treatment. I am grateful for champions like Reps. Jayapal and Smith, and Sen. Booker for recognizing that detained immigrants deserve dignity and rights, too.”
Years later, Nam turned his life around by disconnecting himself completely from past friends and influences that could have led him back to prison. He started a family and dedicated himself to his Christian faith. Nam became a pastor and started his own ministry called Loi Song Tin Lanh (A Christian Lifestyle) with more than 11,000 online followers. Nam also supports his US citizen wife and two children by managing a large retail store that serves the Vietnamese community. In 2017, Nam became a graduate of SEARAC’s Leadership and Advocacy Training program, where his story of detention and transformation inspired others to stand in support of reforming unjust detention and deportation policies.
“Nam’s story and others like it are all too common in the Southeast Asian American community,” said Quyen Dinh, executive director of SEARAC. “Many young children who came to the country as refugees have had to grow up with no support, no mentors, and in many cases, no family members to depend on, leading many youth directly into the school-to-prison-to-deportation pipeline. We applaud Reps. Jayapal and Smith, and Sen. Booker for introducing legislation that addresses the issue of mandatory detention and seeks to create humane detention standards. And we are encouraged that the legislation includes limited English individuals who do not have meaningful access to translators in its definition of ‘vulnerable persons.’ SEARAC is committed to working with our congressional allies to move this bill in the House and Senate.”