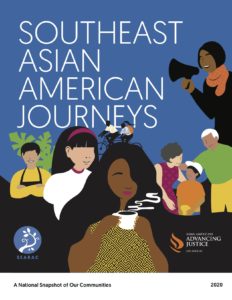 Washington, DC — Today, the Southeast Asia Resource Action Center (SEARAC) and Asian Americans Advancing Justice-Los Angeles (AAAJ-LA) launched a new report highlighting socioeconomic, housing, immigration, health, and education trends within the Southeast Asian American (SEAA) community in the United States. Meant as a resource for policymakers, funders, community-based organizations, organizers, and the general public, Southeast Asian American Journeys: A National Snapshot of Our Communities captures key disaggregated data for SEAA refugee communities who fled the trauma of war and violence following the Vietnam War, Khmer Rouge genocide, and bombings in Laos to seek haven in the United States 45 years ago. This comprehensive national report also features statewide profiles, as well as individual refugee and resettlement narratives.
Click here to read the report.
In 1975, the US occupation in Southeast Asia ended with the largest mass resettlement of 1.1 million refugees in America’s history. Due to the lack of key resettlement support systems, SEAA refugees were made to live in neighborhoods plagued by gang violence and undeerresourced schools while navigating unaddressed trauma from the wars and limited support for cultural integration. While these challenges and inequities still impact SEAAs today, this vibrant and resilient community has also navigated these obstacles to become critical, contributing members to the United States. Today, SEAAs number over 2.7 million people strong.
With the support of community members and organizations, Southeast Asian American Journeys: A National Snapshot of Our Communities illuminates not only SEAA challenges but also their resilience and successes throughout the decades, from resettlement to growing up in low-income neighborhoods to fighting the school-to-prison-to-deportation pipeline. The data provides both national level data, as well as state-specific data for California, Massachuesettes, Minnesota, Texas, and Washington — states with a sizable population of SEAAs.
One key finding from this report revealed that nearly 30% of SEAAs have not completed high school or passed the GED, more than double the national average (13%). Out of all SEAA ethnic groups, Cambodian Americans are the least likely to hold a high school diploma. One interviewee shared, “I am the daughter of Cambodian refugees. Growing up, five of us lived in a tiny apartment in Chinatown. Gang violence was common. Poverty was evident. And yet, I always had a sense of hope because I could see what world was possible through my amazing public schools and libraries.”
“At the heart of the Southeast Asian American refugee community’s 45-year history is a story of survivors, born out of the harrowing escape from war decades ago and continuing through the adversity faced upon US resettlement,” said Quyen Dinh, executive director of SEARAC. “Through this report, we honor the courage, resilience, and love passed down from our elders and ancestors. By centering this report on critical disaggregated data that is often masked by the myth of a thriving Asian American model minority, it is our hope that policymakers can implement the recommendations outlined so that our families can access pathways to thrive and flourish in this country that we now call home.”
Click here to view the report with spreads.