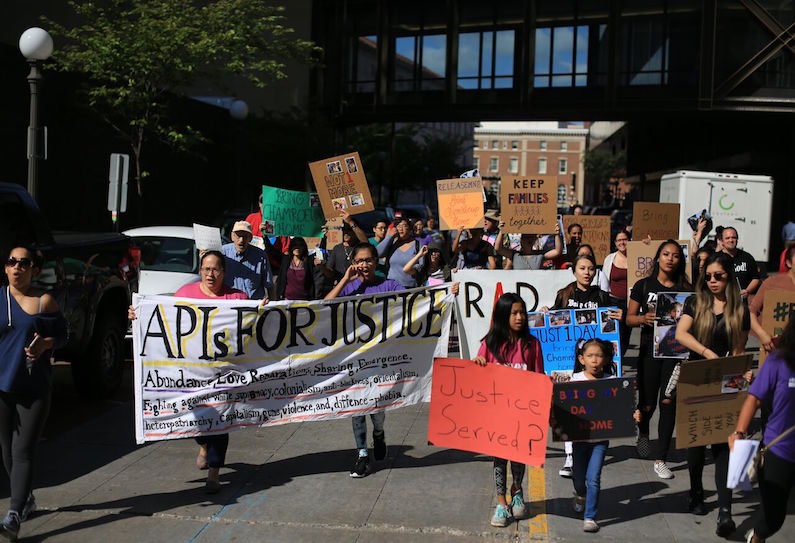 St. Paul, MN – Mobilized by the #ReleaseMN8 campaign, over 70 community members gathered at Ramsey County Attorney John Choi’s office today to demand that he reduce Chamroeun Phan‘s 365-day prison sentence by one day, which would guarantee him automatic relief from deportation. Phan has been in immigration detention for a year, despite being issued deportation relief by an immigration judge in May. Choi himself has told Phan’s family he sympathizes with them, saying “I do not believe that deporting Mr. Phan to a country where he has never lived and whose language he does not speak is a fair consequence.” Yet now that the power is in his hands, Choi seems reluctant to take any action.
A husband and father from Maplewood, MN, Phan arrived to the U.S. as an infant and a refugee after his parents fled the Khmer Rouge genocide. He was born in a Thai refugee camp and has never set foot in Cambodia, the country the Trump Administration is now seeking to deport him to.
“Today is the one-year anniversary since Immigration and Customs Enforcement (ICE) took my brother away,” said Phan’s sister, Montha Chum. “He made a mistake of breaking three windows at a bar eight years ago, has served his time in jail and completed probation. It is a huge injustice that he has now been sitting in immigration detention for a year, when he is clearly not a threat to his community and has not reoffended since 2009. His family misses him dearly.”
Earlier this spring, an immigration judge issued Phan a waiver granting him deportation relief due to the extreme hardship his deportation would cause his U.S. citizen wife, daughter and elderly parents. The Department of Homeland Security (DHS) quickly filed an appeal, which kept Phan in detention.
“The prolonged jail-like detention of immigrants and refugees is inhumane and unacceptable,” said Quyen Dinh, executive director of SEARAC. “We urge County Attorney John Choi to use his power to reduce Chamroeun’s sentence by one day so he can immediately be reunited with family. We also demand that ICE do the right thing by releasing this husband and father to do what is just and right.”

Call John Choi’s office today to keep up the pressure!

Call Ramsey County Attorney John Choi’s office at 651-266-3222:
My name is ______ and I’m calling from ______. I’m appalled to hear that Mr. Chamroeun Phan (pronounced Chum-run Pawn) has now been detained by ICE for one whole year. I know that you can bring Mr. Phan home to his family by retroactively reducing his sentence by just one day. Please exercise the powers vested in you by the public and bring Mr. Phan home. Thank you.