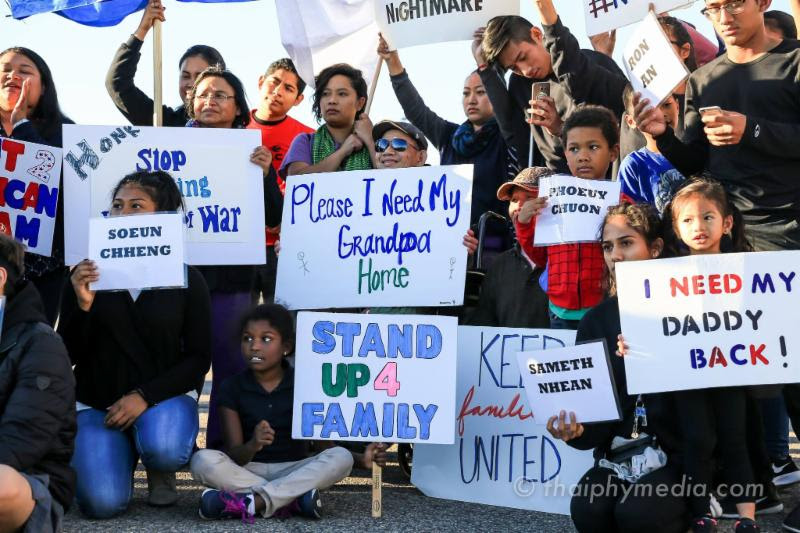 The #ReleaseMN8 campaign, together with the Southeast Asia Resource Action Center (SEARAC), National Immigration Project of the National Lawyers Guild (NIPNLG), and the University of Minnesota James H. Binger Center of New Americans, today launches the Southeast Asian American Solidarity Toolkit: A Guide to Resisting Detentions and Deportations from the #ReleaseMN8 Campaign.
This one-of-a-kind resource provides organizing, advocacy, and legal tools, tips, and resources to support families whose loved ones are facing detention and removal. Authored by impacted family members, campaign organizers, lawyers, and advocates, the toolkit offers insight into how a small Minnesota community inspired a nationwide movement to save its loved ones from deportation to Cambodia.
The #ReleaseMN8 campaign was created in 2016 when eight Cambodian men were abruptly detained by Immigration and Customs Enforcement (ICE) for immediate deportation. These lawful permanent residents, who came into the United States as refugee children and babies, were being deported for old criminal convictions for which they had already served their sentences.
Since 1998, more than 16,000 Southeast Asian immigrants have been issued orders of deportation, but less than 2,000 have been deported. Over 14,000 of these individuals are living in the U.S. in a state of limbo, uncertain of when ICE will once again try to detain them.1 Due to the unique post-war diplomatic relationships between the United States and Laos, Cambodia, and Vietnam, the deportation process to these countries generally takes longer compared to others. During that extended processing time, many community members transform their lives, buy homes, and start families and businesses, only to be detained years and even decades later for old offenses committed in their youth.
This toolkit comes at a time when fear among Southeast Asian American families is at an all-time high following US sanctions on Cambodia and Laos; the biggest Cambodian and Vietnamese detention roundup in 2017; and the biggest deportation of Cambodian immigrants on one flight in 2018.
“Our campaign was founded by the love we had for our families and for our community,” said #ReleaseMN8 campaign organizer Jenny Srey, whose husband Ched was able to secure deportation relief. “We believe all families have the right to be together, and we want to remain engaged in this movement to support other families who are at risk of being ripped apart. Impacted families often want to fight for their loved ones but are overwhelmed and don’t know where to begin. We hope this guide helps families see that they have the power to organize and to fight for change.”
Julie Mao, attorney from NIPNLG, said, “This toolkit is the result of transformative community organizing by brave immigrants and families who refused to resign themselves to deportation. I hope the lessons learned during the #ReleaseMN8 campaign and distilled in this toolkit demonstrate that liberation is possible even under the Trump Administration, when communities organize, defend themselves, and work in collaboration with dedicated lawyering.”
Linus Chan, with the University of Minnesota James H. Binger Center of New Americans, said “I was lucky enough to witness up close the incredible work and advocacy of #ReleaseMN8. Their work in advocating and protecting their families provides a unique opportunity to not just provide an example of what is possible, but also to give concrete tips and tools from the people who have lived through the crises they seek to prevent. Their work is inspiring, but perhaps more importantly, their work can lead to concrete change.“
“The #ReleaseMN8 campaign inspired many of us to be courageous, to hope, and to be bolder in our advocacy for legislative solutions to laws that fail to recognize the resilience, humanity, and restoration to which human beings are capable,” saidQuyen Dinh, executive director of SEARAC. “We are proud to have worked with the campaign and our other partners to offer a new resource that will hopefully inspire families to mobilize and fight for immigrant justice.
Click here to access the toolkit.
REFERENCE
1. Transactional Records Access Clearinghouse, “U.S. Deportation Outcomes by Charge, Completed Cases in Immigration Courts”: http://trac.syr.edu/phptools/immigration/court_backlog/deport_outcome_charge.php & Department of Homeland Security (DHS) Statistics