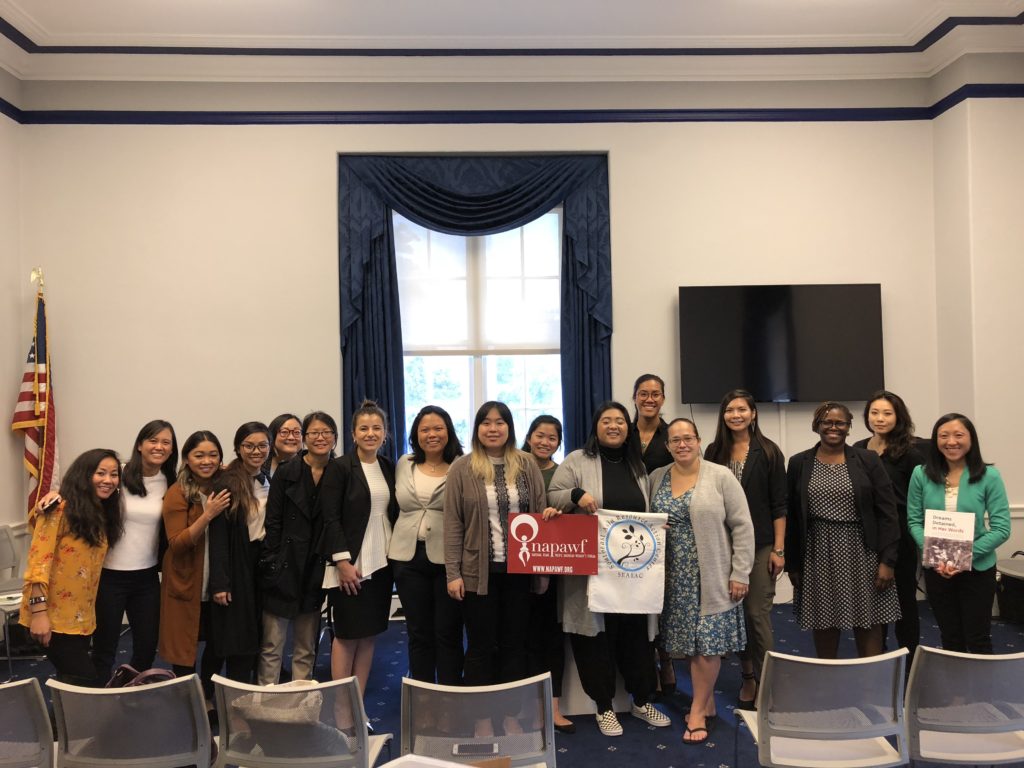 “Dreams Detained, in Her Words” report highlights effects of detentions and deportations on the Southeast Asian American community

Washington, DC– Over the last two days, the National Asian Pacific American Women’s Forum (NAPAWF) and the Southeast Asia Resource Action Center (SEARAC) hosted briefings on Capitol Hill to help educate and inform elected officials and their staff about the impact of immigration policy on Southeast Asian American (SEAA) communities. During the sessions, the groups discussed findings from their new joint immigration report; women who were interviewed in the immigration report attended the briefings to share their stories with attendees and elected officials.

The number of SEAAs being targeted for deportation dramatically increased last year following the Trump Administration’s sanctioning of Cambodia and subsequent detention of Vietnamese and Cambodian immigrants. This has led to the deportation of the largest group of Cambodians ever on one flight in April of this year. A few months later, the Trump Administration once again issued visa sanctions–this time, targeting Laos.

These repeated, aggressive actions from the White House have stoked fear among Southeast Asian refugees, many of whom arrived to this country as children and have never even set foot in the countries the government is trying to deport them to. Since 1998, more than 16,000 SEAA community members have been issued final orders of removal to Laos, Cambodia, and Vietnam. Over 14,000 continue to live in this country in a state of limbo, not knowing if or when they will be deported. The sudden and forcible removal of SEAA individuals from their communities leaves lasting negative financial, physical, and emotional effects – not only on the individuals who are deported, but also on their families.

The “Dreams Detained, in Her Words” report tells the stories of women whose SEAA family members were detained or deported, the struggles they faced, and how they dealt with the aftermath of the deportation. Many were forced to find new ways to make ends meet, all while shouldering a heavy emotional burden for their family. In sharing their experiences, these women shed light on the human cost of an immigration system that continues to fail our country.

“We can’t be leaders of the free world, we can’t be leaders of democracy, if we do not practice it ourselves on our own soil,” said Duckworth. “The fight for food stamps, access, for more language representation, for the reunification of families, for greater access to this country and the immigration process, that continues. If we don’t pay attention, we will lose those battles, and no one will even know.”

“We are so proud of the courageous Southeast Asian American women who contributed to this powerful report,” said Quyen Dinh, Executive Director of the Southeast Asia Resource Action Center (SEARAC). “Their love and silent struggle amidst overwhelming injustices have inspired some of the most powerful campaigns to fight unjust mandatory detention and deportation policies. We celebrate their voices, their resilience, and their strength to fight for the basic human right to be with their loved ones, and we call on members of Congress to stand with them as they call for reforms to our broken immigration system.”

“This groundbreaking report offers a new look at the immigration discussion from the perspective of Southeast Asian American women who are suffering under these cruel policies. Separating families is a direct threat to reproductive justice. In addition to emotional and financial strain, deportation and threats of deportation place the traumatic burden of separation on the entire family,” said Sung Yeon Choimorrow, Executive Director of the National Asian Pacific American Women’s Forum. “Southeast Asian Americans are fighting for basic human dignity and the right to stay with their families, but we owe them so much more. They deserve freedom and the agency to make choices about their bodies, their families, and their communities without shame or fear of deportation.” 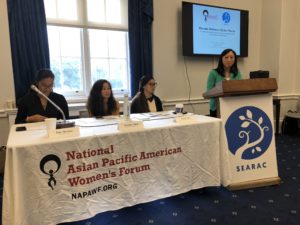 “We spent so much time and money to support our loved ones through the trauma of family separation. For me, it even came at the cost of time with my own children. But all the money we spent on bringing my brother home was priceless, because now he is back with us,” said Montha Chum, who along with several other women and their families started #ReleaseMN8, a campaign to free eight Southeast Asian Americans from Minnesota who faced detention and deportation. “Detentions and deportations have been happening in the Southeast Asian American community for over two decades now. To members of Congress and their staff: listen to your constituents. We need you to fight for us.”