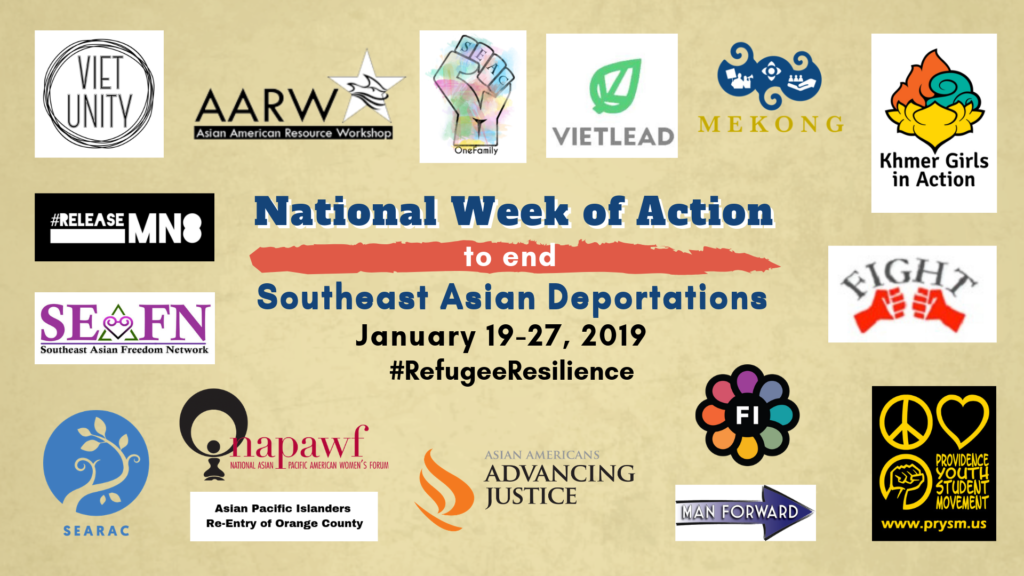 Actions spanned 15 cities across the country

Nationwide– This week, impacted communities, social justice and advocacy organizations, and other allies across the country wrapped up a national week of action to support Southeast Asian American communities as they are terrorized by policies of mass incarceration and deportation. The week of action, which spanned 15 cities across the country, commenced shortly before Martin Luther King Jr. Day to remember the three evils – racism, militarism, and poverty – that still plague our country.
The Southeast Asian American community is the largest refugee community ever to resettle in America, following the mass persecution and genocide during the Vietnam war, the Khmer Rouge-orchestrated genocide in Cambodia, and the mass bombing of Laos. Organized in response to one of the largest Southeast Asian deportation flights in US history in December, the week of action took place in California, Georgia, Massachusetts, Minnesota, New York, North Carolina, Pennsylvania, Rhode Island, Texas, and Washington state, and included a variety of rallies, teach-ins, community forums, documentary screenings, and digital actions. More than 6,000 people participated in countrywide events during the week of action.
“When my father was picked up by ICE, we were ready to prepare for the worst while praying for the best. It’s not easy knowing my father could miss big family events like birthdays, graduations, and weddings. Without my father, nothing would be the same,” said Natiya Pham, 18, who shared her family’s story at with approximately 70 community members and advocates at a teach-in organized by SEAC Village and Asian Americans Advancing Justice-Atlanta in Atlanta, Georgia. Natiya’s father was arrested and detained by ICE during one of the first raids under the Trump Administration and is currently facing the threat of deportation.
Other participants in the National Week of Action to End Southeast Asian Deportations expressed the following:
“Deporting our community members doesn’t make things better in our community. It creates more suffering and causes more harm. We should be helping our community to heal, not creating more trauma. Make a difference. Keep our families together!” – Borey “PJ” Ai, member, Asian Prisoner Support Committee, participant in  Sacramento, CA, action
“My brother is living in fear with an order of removal. We are refugees. We are strong and resilient; we fled from a US-backed war only to be resettled in an America of racial inequity, failing schools, and mass incarceration. We are survivors of a war we didn’t choose – a war that the US fought on our parents’ soil with boots and bombs. We are here because you were there.” – Theary Voeul, member, Providence Youth Student Movement, participant in Bristol County, MA, action
“Thank you to the communities and the elected officials who supported us to prevent unjust deportations of Southeast Asians refugees. Many of us had paid our debts to society and also received lifetime ICE supervision. Since our releases from prison decades ago, we have committed to live law-abiding lives and become contributed community members. Targeting us now for deportation is both cruel and inhumane. The practice of family separation leads to human rights violations to our spouses and children, who are victims of this deportation push. We call for mercy and reconsideration for Southeast Asian refugees who made decades-old mistakes and are now in deportation limbo. America is our home.”  – Tung Nguyen, impacted, California
“Dr. King’s radical legacy impacts us all today, and we’re indebted to his leadership. In one of his most unpopular stances toward the end of his life, MLK stood against US war and militarism in Southeast Asia and connected racism and oppression abroad and at home. At the Reclaim MLK march, Asians 4 Black Lives marched with a 40-foot banner in the shape of a dragon detailing the history of Southeast Asian communities, implicating US roles from war to deportation.” – Sarah Lee, Community Advocate, Asian Americans Advancing Justice – Asian Law Caucus, participant in Oakland, CA action
Local and federal elected officials also joined in solidarity with the Southeast Asian American community.
Participating in a Twitterstorm hosted by the Southeast Asia Resource Action Center was Rep. Alan Lowenthal (CA-47), who also led a Congressional sign-on letter expressing concern over attempts by the Trump Administration to renegotiate a repatriation agreement between Vietnam and the United States: