AAPIs say, “Immigrants and Refugees Deserve Better than a Harmful Bill and a Fake National Emergency” 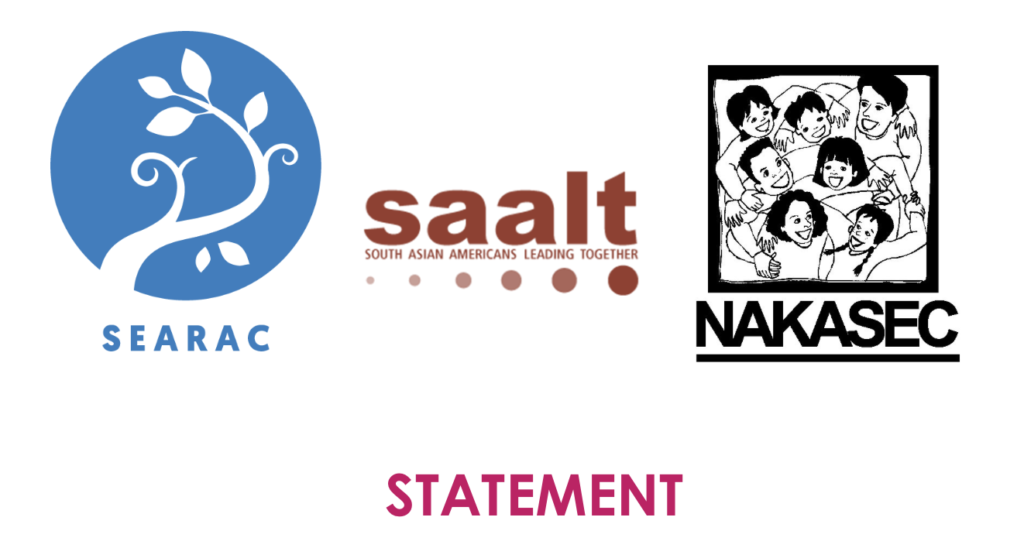 Washington, DC – The Southeast Asia Resource Action Center (SEARAC), National Korean American Service & Education Consortium (NAKASEC), and South Asian Americans Leading Together (SAALT) are gravely concerned by the steps taken yesterday by the United States Congress and the president.
First, Asian American Pacific Islander (AAPI) immigrant families are deeply disappointed with the passage of the Consolidated Appropriations Act of 2019 in both the House and Senate yesterday.
We understand the immense pressure that negotiators were under to prevent another government shutdown. We similarly want to keep our government operating. Nevertheless, our organizations are alarmed at the inclusion of $1.375 billion for a physical barrier (a total of 55 miles), an 11% increase in funding for 45,274 Immigration and Customs Enforcement (ICE) detention beds, and more enforcement agents. AAPI communities have made clear that any bill including any of these measures is unacceptable. A full list of measures that AAPI communities will not stand for can be found in this letter to congressional leaders.
Both the border wall and the presence of ICE are sources of terror for all immigrant communities. The wall is a symbol of hate for any immigrant living within and outside of the United States, and it directs billions of taxpayer dollars to separating families. Furthermore, the bill does not place a limit on the number of ICE detention beds nor does it restrict the authority of the Department of Homeland Security from transferring or reprogramming funding internally, which enables ICE to continue expanding immigrant incarceration and deportation at will.
Second, President Trump intends to declare a “national emergency” at the border in order to justify the need for his border wall. Make no mistake, there is no national emergency happening at the border. Rather, there is a humanitarian crisis happening at the border, and it is a crisis that President Trump and his Administration caused in its entirety. The president’s intention to declare a “national emergency” is a unilateral rebuke of our democratic process driven by an irrational desire to fund an anti-immigrant, unnecessary, and unpopular border wall after Congress would not approve the $5.7 billion the president initially demanded. Two-thirds of Americans do not support a national emergency.
Suman Raghunathan, executive director of South Asian Americans Leading Together (SAALT), said:  “In just the last 10 days, we’ve been hearing firsthand about the cruel treatment towards nine South Asian men currently on hunger strike in a detention facility in El Paso. Despite their asylum requests, they’ve been subject to violent force-feeding, solitary confinement, and constant threats of deportation.  What’s particularly devastating is that we’ve seen similar treatment occur previously in this same facility, and we have received accounts of abuse of detainees in several facilities across the country. This bill does nothing to address the systemic issues with our detention system and only serves to perpetuate abusive situations like the ones we are witnessing now.”
Jonathan Paik, director of the Korean Resource Center, a NAKASEC affiliate, stated: “This is a reckless move and endangers the future of our country. Our democracy is in incredible danger – this is the true national emergency. We call on all our fellow Americans to resist these abuses of power and reclaim our democracy!”

Quyen Dinh, executive director of SEARAC, expressed: “The Southeast Asian American refugee community has been devastated by the expansion of our detention and deportation system, and our families continue to be torn apart at unprecedented rates. Our organizations understand that this is a difficult position for our policymakers to be in, and none of them should be forced to make this choice. But our communities elected our policymakers to represent our interests, and Asian Americans have declared in no uncertain terms that we oppose the passage of this bill and the president’s unconstitutional and falsely justified national emergency. We remain vigilant and committed to working with our congressional partners to protect the rights of our refugees and immigrants.”