Tung Nguyen, Ny Nourn, and Phal Sok have all experienced the nightmare of facing deportation — of being sent to ICE after serving their time for crimes of youth and poverty served decades ago. And Montha Chum knows the pain of fighting for the release of her brother’s detention, after serving time for breaking a few bar windows where the business owner did not even press charges. But through SEARAC’s work, they were able to transform those experiences of pain into power, by calling on members of Congress to stop this injustice and nightmare for everyone, not just a select few. This past year, we brought these fierce leaders to DC for three different events, including serving as key witnesses for a congressional forum attended by 10 US House Representatives. 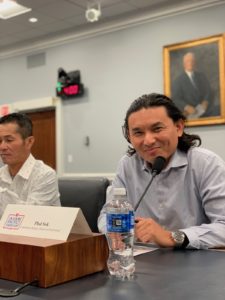 “In 2015, I would be one of the first and few granted early parole through a vigorous process; but because I was not born here, I was handed over to an ICE contractor on the day of my release, while I watched others go home smiling into their freedom,” Phal testified during the November forum. “I would be placed in immigrant jail and put in removal proceedings. I was forced into a court system that does not guarantee due process. I felt firsthand what it meant to face a judge without an attorney.”

DONATE TODAY
SEARAC firmly believes that our advocacy work must be led by and grounded in community. By donating today, you would increase the opportunities for impacted community members to share their important personal narratives to change unjust laws.
Thank you for your support in uplifting community voices to make change. We could not do this work without you.
In solidarity,
Katrina Dizon Mariategue
Director of National Policy
Southeast Asia Resource Action Center
P.S. So far, you’ve helped raise $2,675. Twenty-eight of you will be receiving a SEARAC sticker for donating $40; three of you will get a 2020 Census tote; and one of you will win an Apple iPad or equivalent gift card–unless others join you in starting a fundraiser! Thank you to all who’ve supported us so far. We are so very grateful!