Breaking Away from the Work Hustle

The glorious, coveted four-day work week. Three months into my time at SEARAC, I am finding it challenging. If you’re used to hustling at work like me, it’ll be hard for you, too.

As a child from an immigrant-refugee family, the work hustle is in my blood. At 60 years old, my dad works six days a week at an ethnic grocery store. It feels as if he’s been doing this since before I was born. My mom is a homemaker and a caretaker, and her role never, ever ends. In the Doan family, we’re used to being consumed by our jobs as a sure way to break into the American Dream.

I began earning when I was 10 years old. I helped my uncle with his produce stand at the flea market. I helped another uncle sell cotton candy at soccer games. I worked the drive-thru at our local Starbucks. I then went from working at a tech start-up to hustling in the kitchens of Michelin-star restaurants. I wanted to find meaning and purpose in my life, so in 2018, I became a community organizer. 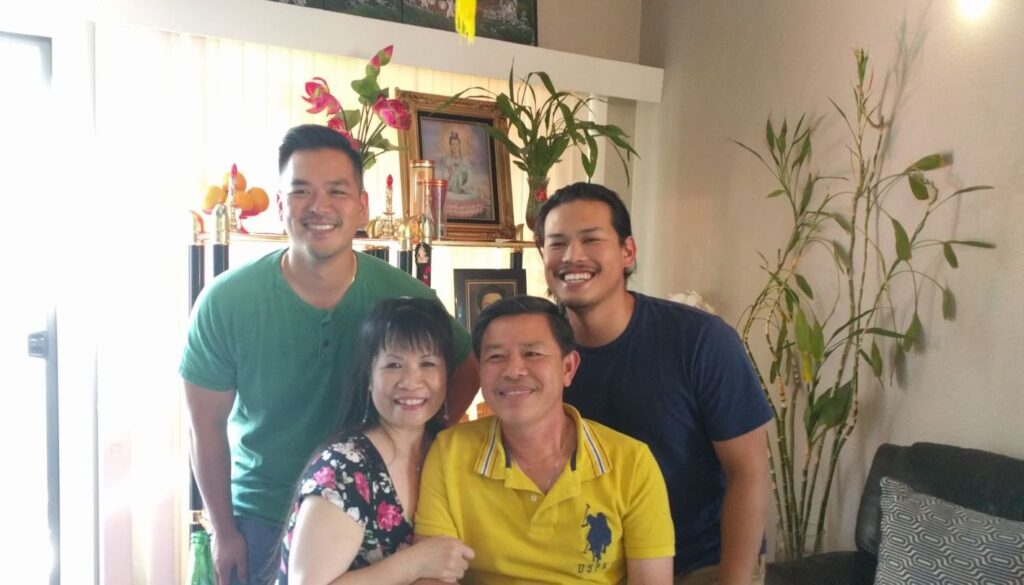 Danny (right) having lunch with friends and family at his parents’ home, 2016. (Photo courtesy of Danny Doan)

I worked alongside multifaith communities, tenants, and the unhoused to fight the system that promised the American Dream but was instead designed to disempower everyday people.

In the Doan family, we’re used to being consumed by our jobs as a sure way to break into the American Dream.

On any day of the week, at all hours of the day, you’d find me at places of worship, grocery stores, knocking on doors at apartment complexes, and checking in with the unhoused. These are some of the things I’ve heard:

“I don’t like the carpets in the sanctuary.”
“I’ve been having trouble paying for rent this month.”
“I don’t know where I’m going to sleep tonight.”
“The rent is too damn high.”
“I don’t have enough for my kids’ lunches this week.”

The work consumed my life, and being a community organizer blurred my work and personal boundaries. I thought that’s how it was supposed to be: to create change and find meaning and purpose. But I noticed how it affected my body, my mind, and my soul. I was tired, sad, and defeated.

I joined SEARAC, a team that is committed to change and a four-day work week.

I’m used to the grind and toil, and I thought that was the best way to fight the system. But systemic change doesn’t happen quickly, and I need to be able to do this in the long run. With the team’s support, I’m learning how to make this work more sustainable by unblurring the lines and carving out boundaries for myself. The transition to a four-day work week is tough, but it’s giving me the opportunity to prioritize my wellness so that I can continue to fight alongside my team and my community, and to be a witness to our successes.

Danny Doan is SEARAC’s Program Manager and can be reached at danny@searac.org.

For more blogs in our #WorkplaceWellness series, see: