When I Was Your Age 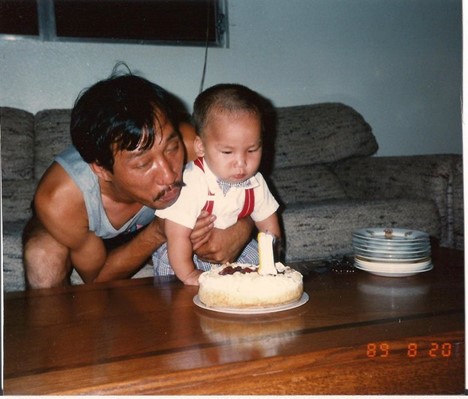 If any of you know my dad well, you’ll know that being silly, lighthearted, and goofy are just in his nature, whether he’s trying to be or not.  There was this one time where we were all at the dinner table and my sister sneezed.

My dad then said “Achee.”

My sister looked at my dad puzzled and said, “Wait, what did you say?”

“I said ‘Achee,’” he replied in Vietnamese. We all looked at him confused, so he persisted: “Achee! You know! It’s what white people say when someone sneezes!”

And then it dawned on the kids that he was confusing “Achoo” with “Bless you,” and somehow came up with his own hybrid form, “Achee.”

We all started laughing, and my oldest sister said, “You’re supposed to say ‘Bless you!’”

And then out of nowhere, my mom burst out: “I TOLD YOU SO! I KNEW ACHEE SOUNDED WEIRD!” Which was followed by even more laughter.

My parents owned their own business at the time, and while I was at school flirting with girls (or at least what I thought was flirting), they were probably having mini-arguments on English slang and vocabulary.

My dad’s always been a funny guy. He was always one to exaggerate things and crack bad dad jokes. He usually left the everyday disciplining to my mom, and from my previous posts, you’ll know that nobody messes with mom. But as seriously as we took our mom, if Dad yelled at us, then we knew we had messed up. Thankfully, I was a pretty good kid, so those lectures were few and far between.

I definitely grew up idolizing the man. I was weaned on tales of his adventures in Vietnam, getting into fights with the boys from the neighboring town and dishing out whippings comparable to Jackie Chan! He even taught me how to fight when I was in middle school. (His spinning back fist is no lie. Let’s just say I know from experience. I also learned the important art of ducking that day as well.)

I was out at our liquor store in Hopkins, MN, working with the old man on a hot summer’s day. We were both sitting behind the counter waiting for the next set of customers to come in, putting off the endless work that comes with owning your own business. I was probably texting a cute girl trying to make plans, and he was watching probably watching sportscenter. Out of nowhere he says to me, “You got it pretty nice you know that? You know what I was doing when I was your age?”

“Hmm?” I replied not looking up from my phone.

“I was fighting in a war when I was 18,” he said nonchalantly.

This definitely caught me by surprise.  My dad never really ever talked about the war with us kids, and up until that point it was kind of an unspoken circumstance. Every once in a while we would hear, “In the army we had to…” but nothing of much substance.

He continued, “There was this time when where we were out in the field with our captain. There were about 30 of us, and we had to get to a rendez-vous point. We were looking at the map, and the captain picked a route that was faster but dangerous. A few of us were from the surrounding towns, and we started to argue with him that this route we were taking was a bad idea and that we should take a route that was safer even if it was slower.”

I looked at him in shock — he was actually telling me a story about his time in the war, something that was always so ambiguous and far away from me. Still staring at the television, he carried on: “There were three of us that got into it with him. He wasn’t from the area, but he still thought he knew better. The three of us were so angry at his stubbornness that we marched off away from them to calm down. Fifteen minutes later, we were probably about 100 feet away when all of a sudden we heard huge explosions and saw our platoon-mates get hit. Just like that, our whole squad was killed in a matter of seconds, with only the three of us still alive.”

I had no idea what to think. I was staring at his face, but he was still looking up at the television, so I only saw his profile. I had to assume that he wasn’t seeing the highlights on the television anymore but looking back into a past that was filled with loss and melancholy.

“I wasn’t sure what to do. I was in shock. I started to pick up a few of the body parts of our friends and put them in my pockets. Maybe I could bring them home to their families so they could have something to bury.

For months, our families thought we were dead, because it was reported that the whole group had been wiped out. It took us weeks to get back to a safe zone because we wanted to be careful.”

I can’t quite remember what happened next after that. He probably made a joke or made a remark like, “I wonder what Mom’s going to cook for your last dinner at home”

Today is Ba’s 60th birthday. I just got off the phone with Ma; at the moment, he’s doing some engine maintenance on a used fishing boat they recently got. He and Ma have been fixing it up for the last year and a half, and it’s almost ready to set sail for the first time: Lady Mocha II.

I spent most of my day today complaining to my friends about how I just had to pay $950 for some car maintenance. Then I rambled on about how I was annoyed with work and being swamped with new accounting software and tracking down other people’s receipts. When I sat down to write this, I didn’t know what I was going to write about until I started typing. It made me remember how lucky I am to be living the life I’m living.

I’m in the city I want to be in, doing what I want to do for a living, and my Ba and Ma are directly responsible for that. There definitely is a language barrier. It makes me sad that my Vietnamese isn’t up to par, because I’ll never be able to fully put into words how much I appreciate every sacrifice they’ve made for me and my sisters. Hopefully, at the very least I’ll be able to show them, someday, even if I can’t tell them.