For a Iu Mien community who is known to troubleshoot on its own, COVID-19 has brought much concern to advocates like May Saechao, a risk assessor from Portland, OR, and SEARAC Leadership and Advocacy Training alumnus. “Mien place a high emphasis on family and community, so naturally, they tend to rely on one another instead, especially in times such as a pandemic,” said May. 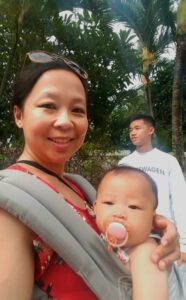 May shared that culturally competent services and material were already scarce prior to the pandemic. “Through organizations, such as APANO, IRCO, and SEARAC, we have been able to provide some translated material for our community, but there is also a challenge, as only a small percentage of Iu Mien can read our written language,” May said, adding that the Mien language was created sometime in the ’60s or ’70s as way to help the Iu Mien community read the Bible and other related Christian material. Those who are well informed often cannot translate at the level that is needed to relay the info accurately to elders who need the services the most.

To fill this information gap, many Iu Mien community members are turning to each other for resources, sharing videos and posts on social media, like Facebook and WeChat, and communicating in large message threads with people from all over the world. “With the overwhelming amount of information, it is difficult to help vet the accuracy and legitimacy of all the info for our older population,” May said. “Many rely heavily on who they know, who’ve they been able to trust, and revert to what they know. Conspiracy theories and rumors have been overpowering, at the least. This has caused them to practice harmful and inefficient ways of caring for their health and other recommended practices, such as safe social distancing, proper wearing of masks, sanitizing, etc.”

“We have been through wars, poverty, famine, natural disasters, and other several other types of crises, but yet we still survived.”

According to May, the group that COVID has impacted the most is the Baby Boomer generation, particularly those who are illiterate in English and have no education. Those who have a difficult time effectively caring for their chronic conditions find it harder now to do so with limited office visits and a lack of information and resources. Not only are displaced and laid off workers encountering extreme difficulty in finding employment, but May has also heard reports of increasing discriminatory behavior in the workplace, where employers in factories and manufacturing plants are not implementing sufficient safety and precautionary measures. “Many stay silent, not just because there is a cultural belief to not defy or disrespect authorities but also because of the communication issue with not being able to speak the language,” she said. “There is also an overwhelming amount of fear of retaliation. At a time where jobs are becoming scarce and layoffs are the norm, it’s become a game of survival, which many of them often refer to. Iu Miens from the old country love to compare and contrast life situations they encounter here in the US to their old lives, which can be dangerous sometimes.” By comparing their past refugee experience of survival to their current, more stable access to food and shelter, community members might be willing to settle for the minimum instead of realizing their full worth, May added.

Nevertheless, while it may be difficult to see the silver lining during these uncertain and stressful times, May sees an opportunity for increased civic engagement during an important election and census year. “Having relief activities, regardless of the service, provides an outlet for people to seek assistance and creates space for others to engage with one another, to help strengthen and build relationships amongst each other. In communities like my home state of Oregon, the concept of civic engagement and advocacy for many Southeast Asians, and particularly for the majority of Iu Mien, is a new and unchartered territory. I am hoping that continued invitations to these events and exposure will warm others to the idea.”

“Unique to my culture, being a hilltribe, the Iu Mien were always the minority and had no homeland,” May said. “We were persecuted by the majority and endured constant hardships, fleeing from country to country to seek refuge, and forcing us to frequently adapt and change. In the process of integration and assimilation, we forfeited a lot with the culture to meet some of the standards and practices of the communities in which we live. We have been through wars, poverty, famine, natural disasters, and other several other types of crises, but yet we still survived. Our continued existence today in many countries around the world shows how incredibly resilient we really are despite all the odds. I am confident that this too shall pass for us, as everything else has.”