40th Year and Beyond: Remembrance and Thriving 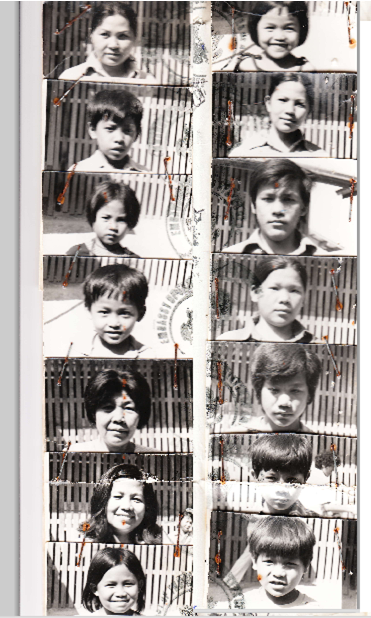 I am who I am because of my heroines: my late grandmother who passed away last summer at 96 years old, my aunts and my mother. Thank you for being strong and resilient!

I am Sarah Kith, a child refugee from Cambodia. Today, approaching my 50th birthday celebration, I am truly grateful. It is beyond my wildest imagination to live the American dream. I earned multiple degrees, working now as a sought-after conflict resolution practitioner, organization development consultant, and coach. My husband and I are blessed with three sons who are thriving. This July, we will be celebrating our 25th year wedding anniversary.

April 17, 2021 marked the 46th year of remembrance as the beginning of one of the darkest days of our Cambodian history. I lost my great grandparents, grandfather, a father, four uncles, and a cousin who was my age, then barely five years old, along with nearly two million other Cambodians.

Similar stories echoed across the Cambodian diasporas and communities around the globe who were displaced as a result of the US and Vietnam war. It was estimated that between 21-25% of the population was killed during the Khmer Rouge regime; predominately men, the elderly, and Cambodian children were tortured, executed, overworked and or starved to death from 1975-1979, four horrific years under Pol Pot’s Khmer Rouge regime.

Between 1979 and 1980, three brave widows — my late grandmother, my grand aunt, and my mother — each led their families on separate journeys, traveling by foot at night, and eventually made their way across the border of Cambodia and Thailand, leaving our homes in Phnom Penh, Battambang, and my grandmother’s birthplace near Siam Reap. Living in makeshift shelters in Khao-I-Dang refugee camp, we waited anxiously for approval to come to the United States.

That day came after President Ronald Reagan was inaugurated as the 40th US President. On February 17, 1981, we landed at the National Ronald Reagan Airport and took roots in the Northern Virginia area after briefly living in Washington, DC, and Maryland. Our original family of fourteen members branched out, quadrupling to 64 members, with the youngest member turning one month old on May 24, 2021.

We see frequent headlines about Cambodians suffering post-traumatic stress disorder (PTSD), and our community is still facing new trauma as some Cambodian families are torn apart once more due to deportation from the U.S. back to the homeland. The impact of COVID-19 adversely impacted vulnerable communities including Cambodian and other Southeast Asian Americans. Poor living conditions and lack of healthcare were exacerbated as members of our communities suffered job losses and lost wages during quarantine. This precarious situation is compounded by ongoing and increasing anti-Asian hate and violence, triggering a renewed and profound sense of insecurity.

Despite these many challenges, we are stronger than we think. Through remembering and honoring our history as both beautiful and difficult, we healed the souls, including those invisible to us. In the process, we healed ourselves and reconstructed new meanings as a way forward. The past and present do not determine the future. Collectively, we get to choose and decide how we respond and move forward. We are strong and resilient.