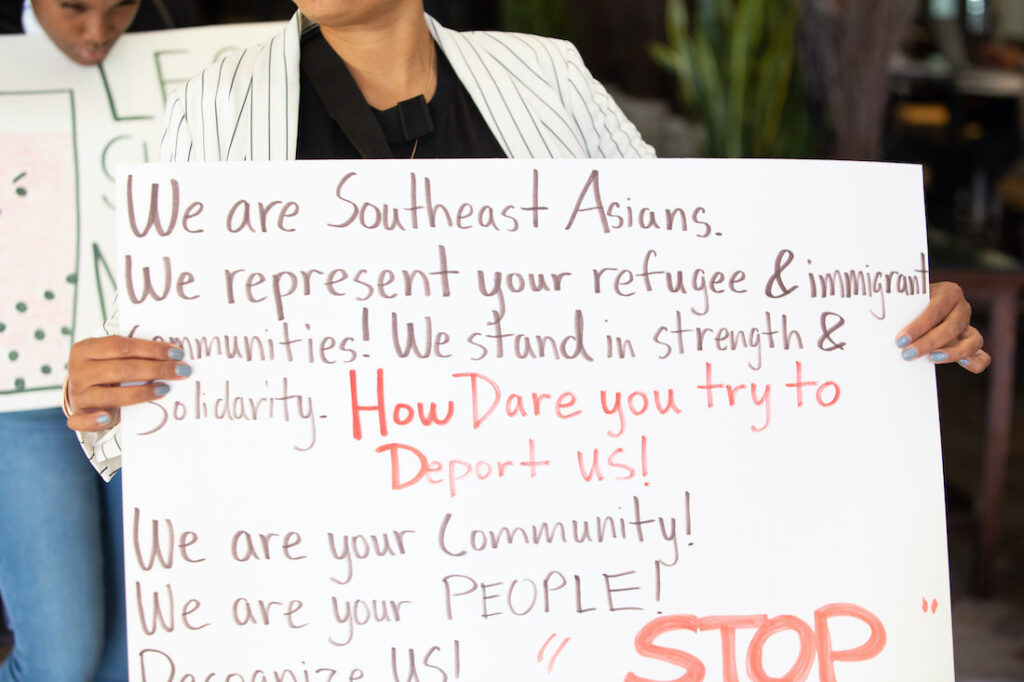 Washington, DC – Today, the Southeast Asia Resource Action Center, Asian Americans Advancing Justice, the Southeast Asian Freedom Network, and the National Council of Asian Pacific Americans sent a letter, signed by 150 organizations, urging President-elect Biden to place a complete moratorium on all deportations immediately upon taking office until Congress can pass robust immigration reform that would repeal sections of the 1996 immigration policies responsible for the United States’ current draconian immigration enforcement system.
A halt to deportations would provide relief for over 15,000 SEAAs with removal orders and would reaffirm President-elect Biden’s commitment to racial justice.The letter also recommended broad protections for Southeast Asian Americans including deprioritizing removals of people with old convictions, lifting visa sanctions on Laos and Cambodia, and requiring that Immigration and Customs Enforcement (ICE) and US Customs and Border Protection (CBP) use their discretionary powers to release all immigrants possible from detention.
The letter is available here.
Katrina Dizon Mariategue, Acting Executive Director, Southeast Asia Resource Action Center:
“Deportations of Southeast Asian Americans have inflicted irreparable harm against our families and our communities. For decades, immigrants and refugees have been criminalized, and families have been torn asunder after fleeing a lifetime of violence. President-elect Biden and Vice President-elect Harris must uphold their commitment to racial justice and dismantle the inhumane immigration laws that continue to terrorize our communities. We are hopeful that the incoming Administration will work with our movement and organizations to stop the further harm to Southeast Asian American refugees and repair the damage done to immigrant communities.”
Ny Nourn, Community Advocate, Asian Americans Advancing Justice – Asian Law Caucus:
“I was born in a refugee camp in Thailand after my mother fled genocide in Cambodia. We were resettled from a life of poverty and violence in the camp to more of the same in the United States. As a young person stuck in an abusive relationship, I was given a life sentence and deportation instead of support. Thankfully, I am free and safe today because of my community. I’ve seen too many of my incarcerated and refugee family face deportation. The Biden Administration must end the violence being inflicted on Southeast Asian refugee communities.”
Phi Nguyen, Litigation Director, Asian Americans Advancing Justice-Atlanta:
“Deportation is a type of violence that flows from America’s web of carceral institutions that aggressively police, criminalize, and punish migrants and people of color. Joe Biden and Kamala Harris ran on a platform to build this country back better. Building America back better must include investment in life, dignity, and care. It must include a complete overhaul and reimagination of an immigration system that prioritizes punishment and perpetuates cycles of displacement. We look forward to working with the Biden Administration to ensure that it delivers on its promises to our immigrant communities.”
Sarath S. Suong, National Director, Southeast Asian Freedom Network:
“Over 45 years ago, Southeast Asians resettled here because the United States military destabilized our home countries under the guise of protecting democracy. As we’ve seen from the past four years, the real threat to American democracy are white supremacist forces like the Trump administration and their followers, not Southeast Asians refugees living under constant threat of detention and deportation. An immigration system that closes borders and throws people into cages need to be abolished. We urge the incoming administration to join us in rebuilding a new system where refugees and immigrants are given the resources and support needed to thrive.”
###
About Asian Americans Advancing Justice
Asian Americans Advancing Justice is a national affiliation of five leading organizations advocating for the civil and human rights of Asian Americans and other underserved communities to promote a fair and equitable society for all. The affiliation’s members are: Advancing Justice | AAJC (Washington, DC), Advancing Justice – Asian Law Caucus (San Francisco), Advancing Justice – Los Angeles, Advancing Justice – Atlanta, and Advancing Justice – Chicago.
About the Southeast Asia Resource Action Center
SEARAC is a national civil rights organization that empowers Cambodian, Laotian, and Vietnamese American communities to create a socially just and equitable society. As representatives of the largest refugee community ever resettled in the United States, SEARAC stands together with other refugee communities, communities of color, and social justice movements in pursuit of social equity.
About the Southeast Asian Freedom Network
Southeast Asian Freedom Network (SEAFN) is an abolitionist movement family of Southeast Asian organizations dedicated to the development and mobilization of our communities through grassroots organizing and movement building. SEAFN member organizations are Mekong-NYC (NY); Freedom, Inc. (WI); ReleaseMN8 (MN); ManForward (MN); Formerly Incarcerated Group Healing Together (WA); VietLead (PA/NJ); Khmer Girls in Action (CA); and Providence Youth Student Movement (RI).