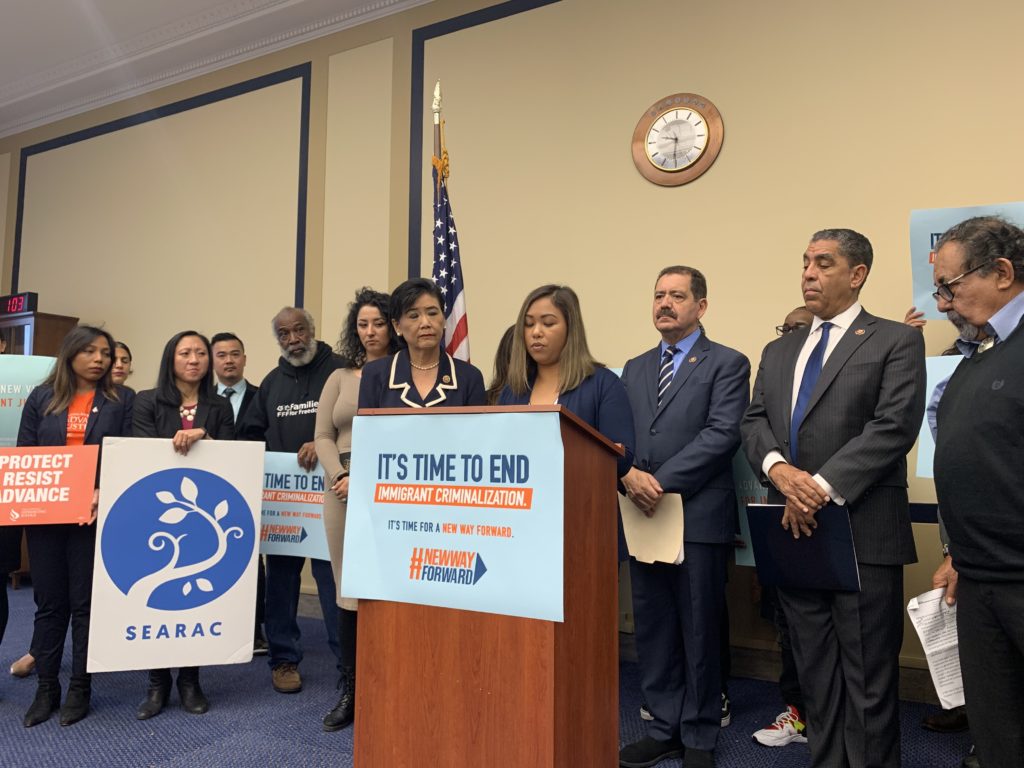 WASHINGTON, DC – Asian Americans Advancing Justice and Southeast Asia Resource Action Center (SEARAC) applaud the introduction of the New Way Forward Act by U.S. House Reps. Jesus “Chuy” Garcia, Pramila Jayapal, Karen Bass, and Ayanna Pressley.
The New Way Forward Act advances the national conversation on immigrants with a criminal record by restoring due process protections for all immigrants, including immigrants in deportation proceedings. Key components of the bill include the below provisions:
In particular, the restoration of judicial discretion for immigration judges would help individuals like Cuong Nguyen, a Vietnamese individual who arrived in the United States at 11. Nguyen is a nail technician and nail salon owner with a 3-year-old son who was Hub detained for over two years in ICE detention and faces deportation for a 13-year-old criminal conviction.
“For the last two years, my loved ones have been living in fear of my deportation. After serving a 24-month prison sentence for my mistake, a decade later I was suddenly separated from my family, missing my son’s first birthday and forcing my wife to be a single parent and manage our business alone without knowing when I would return. That is why the New Way Forward Act is important to me. By restoring judicial discretion to immigration judges, they can finally look at my case, see my family and my contributions to my community, and hopefully provide me and others in my position the relief we so desperately need,” said Nguyen.
Southeast Asian American human rights crisis
Many Southeast Asian American (SEAA) refugees were resettled into low-income, high-crime neighborhoods after fleeing violence during the Vietnam War, Cambodian Genocide, and Secret War in Laos. Due to a variety of circumstances, some individuals entered the criminal justice system. The 1996 immigration laws (the Anti-Terrorism and Effective Death Penalty Act and the Illegal Immigration Reform and Immigrant Responsibility Act) established mandatory detentions and automatic deportations, heavily expanded crimes considered deportable, and restricted judicial discretion for many immigration cases. Because of the retroactive nature of these laws, many SEAA refugees suddenly became deportable overnight for convictions prior to 1996. Though many have already served their time, have families, and have turned their lives around, Immigration and Customs Enforcement continues to detain and deport SEAAs. More than 17,000 SEAAs have been ordered removed from the United States, with over 2,000 individuals deported since 1998. Roughly 15,000 SEAAs currently live with a final order of removal, and roughly 80% of those removal orders are based on past convictions.
“For over two decades, Immigration and Customs Enforcement raided Southeast Asian American communities and tore our families apart. And now, our country’s outdated and unjust immigration laws are being used by this Administration to deport our communities at an unprecedented level. Our country and our communities deserve a new vision of justice and equity inclusive of all immigrant and refugee communities, one that restores dignity and due process to all and provides individuals that our country unjustly removed an opportunity to come home and be reunited with their families. The New Way Forward Act is a milestone bill for our communities, and SEARAC is excited to continue working with Congress to help advance this bill,” said Quyen Dinh, executive director of SEARAC.
“Asian Americans Advancing Justice strongly supports the New Way Forward Act because refugees have survived wars and genocide, and have endured violent and difficult conditions in the under-resourced neighborhoods we were resettled in as children. We are resilient and contribute immensely to this country. Decades later, we should not be torn from our families and communities, and deported to countries that our families were forced to flee,” said Ny Nourn, community advocate at Advancing Justice – Asian Law Caucus.
Photo caption: For five years, Saray Phin, a Cambodian refugee, lived in fear of being separated from her family due to a removal order.