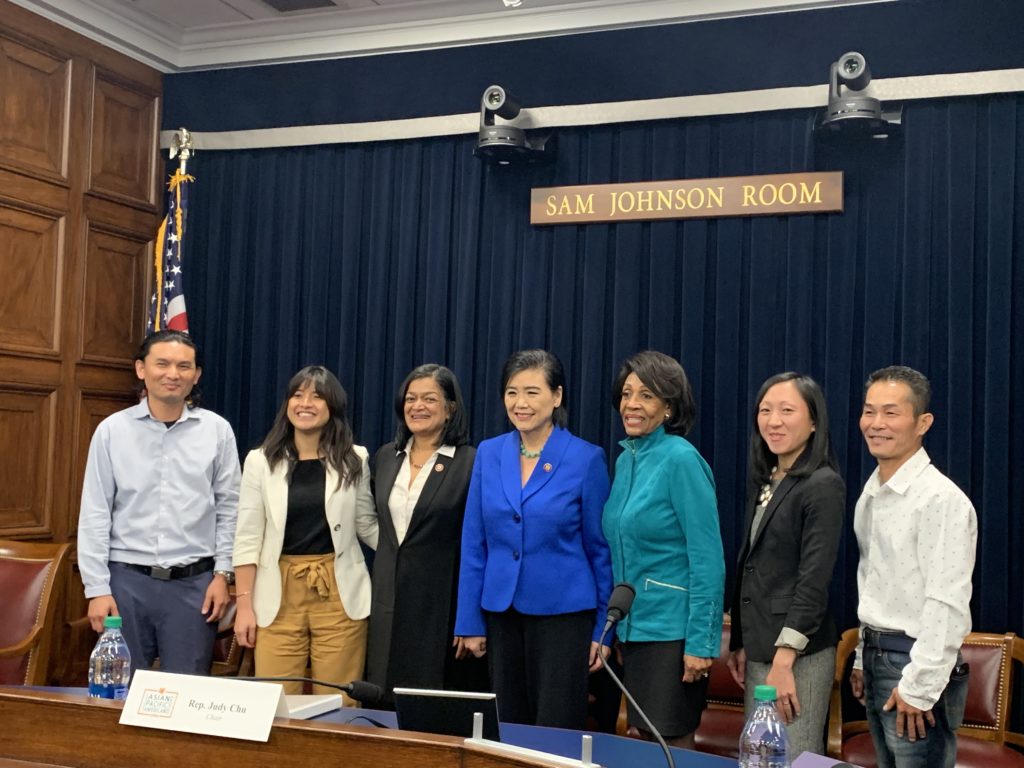 WASHINGTON, DC – Yesterday, the Congressional Asian Pacific American Caucus (CAPAC) held a Congressional Forum on the Rise of Southeast Asian Deportations. Members of Congress in attendance included CAPAC Chair Judy Chu (D-CA-27), CAPAC Immigration Task Force Chair Pramila Jayapal, (D-WA-7) House Judiciary Immigration and Border Security Subcommittee Chair Zoe Lofgren (D-CA-19), and Reps. Ami Bera (D-CA-7), Gil Cisneros (D-CA-39), Lou Correa (D-CA-46), Alan Lowenthal (D-CA-47), Grace Meng (D-NY-6), Harley Rouda (D-CA-48), and Maxine Waters (D-CA-43).
Since 1998, more than 17,000 Southeast Asian refugees have been issued a final order of removal, but due to the unique relationship between the United States and Cambodia, Laos, and Vietnam, many are detained for prolonged periods of time as the US government tries to deport them. The Trump Administration has drastically increased the deportations of Cambodian and Vietnamese Americans, in particular. Between 2017 and 2018, removals of Cambodians increased by 279 percent and Vietnamese removals increased by 58 percent.
Speakers included Phi Nguyen, litigation director at Asian Americans Advancing Justice | Atlanta; Phal Sok, organizer with the Youth Justice Coalition and SEARAC board member; Soros Justice Fellow Tung Nguyen; and SEARAC Executive Director Quyen Dinh.
“As a person with a final removal order, I had no legal status in the United States. I had to apply and pay for a work permit every year without access to any public services,” said Tung Nguyen. “Over 9,000 Vietnamese refugees and immigrants face similar conditions today. Most of them committed their crimes decades ago. As children, we grew up in America with language barriers, cultural conflicts, and poverty, with little to no support to navigate society. We deserve the right to a rehabilitated life.”
“Like many other Cambodians who resettled in the United States as a refugee, this country is the only home I’ve ever known,” said Phal Sok. “In 2015, I was handed over to an ICE contractor on the day of my release because I was not born here. It didn’t matter that I was a refugee, that my conviction was old, that I had only been 61 days old when I came to the US, or that I was a child when convicted. We should not be investing in a system that criminalizes poverty and then mandates deportation. Our laws need to reflect the fact that immigrants have the capacity to turn their lives around regardless of their past.”
“We thank Chairwoman Chu and members of CAPAC for holding this forum to discuss this important issue,” said Quyen Dinh, executive director of SEARAC.“Immigrants and refugees make our communities stronger, and policies that criminalize immigrants and deprive our community members of their basic human rights are unjust. The United States must repeal components of the 1996 laws that continue to serve as the backbone of our broken immigration enforcement system, restore due process to immigrants facing deportation, and create a pathway for deported immigrants to come home. We encourage Congress to advance legislation like the Reuniting Families Act and Dignity for Detained Immigrants Act to provide Southeast Asians facing deportation adequate due process protections and realistic legal relief.”

“We hope that this dialogue with CAPAC members will deepen their understanding of the prison to deportation pipeline for Southeast Asian refugees and generate bold policy solutions to protect our communities from the violence of immigration detention and deportation,” said Phi Nguyen, litigation director at Asian Americans Advancing Justice | Atlanta.