BREAKING: Chamroeun Phan of #ReleaseMN8 Finally Released to His Family 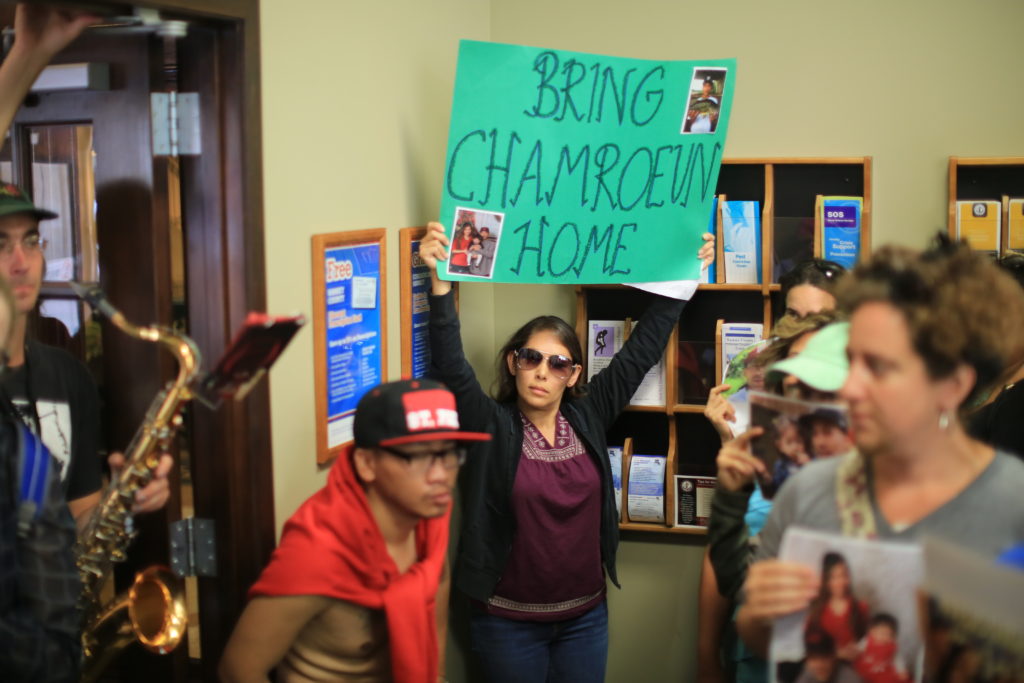 St. Paul, MN – After more than 387 days in immigration detention, Chamroeun Phan of Maplewood, MN, came home to his family on Monday. In May, Phan’s immigration attorney, Mai Neng Moua, successfully argued that Phan’s deportation to Cambodia should be cancelled because of the undue hardship it would cause his family. But the Trump administration appealed the immigration judge’s ruling and refused to release him from detention. As part of the #ReleaseMN8 campaign, Phan’s release Monday came as the result of intense community advocacy and legal challenges.

Montha Chum, Phan’s sister and a lead organizer with #ReleaseMN8, stated, “We are so thankful and relieved to have Shorty back home with us.” Chum continued, “Chamroeun’s release, only by the grace of God, shows the power of community organizing and effective advocacy. The #ReleaseMN8 community, along with our national supporters such as Mijente, Southeast Asian Freedom Network, National Immigration Project of the National Lawyers Guild, and Southeast Asia Resource Action Center, stood by us every step of the way, and refused to let Chamroeun be deported without a fight.”
Phan added, “God never gave up on me.  My family never gave up on me. I can’t even express how grateful I am for the community support, from the Twin Cities to all across the country, thank you so much. God is so good!”
Community members and families of eight Minnesota men slated for deportation to Cambodia a year ago mobilized multiple protests and vigils to defend the men, all of whom came to Minnesota as child refugees. Five of the men have since been deported to Cambodia, but Phan is the third to be released from detention. Ched Nin was released permanently back to his family in February, and Sameth Nhean awaits a decision from the Board of Immigration Appeals (BIA) together with his family.

Phan (center) after his release with Nin (left) and Nhean (right)
A husband and father of a young daughter, Phan arrived to the U.S. as an infant and a refugee after his parents fled the Khmer Rouge genocide. He was born in a Thai refugee camp and has never set foot in Cambodia. The Trump administration sought to deport Phan for a 2009 conviction for property damage after he broke some windows at a bar where he was a regular patron. Phan was given a 365-day suspended sentence. The owner never filed charges and supported Phan’s request for relief from deportation.
Phan’s release came after his lawyer Bruce Nestor filed a successful habeas petition resulting in a federal judge ruling that his continued detention was unconstitutional. ICE was then compelled to release Phan after the community obtained the support of the Ramsey County Attorney’s Office and a Judge to modify his original sentence to 364 days. Nestor said, “Mr. Phan was detained over a year at taxpayer expense and faced separation from his family because of a simple mistake made by his lawyers in 2009. While we celebrate his release, too many other immigrants are similarly detained and deported because of harsh and arbitrary immigration laws, where only a single day change in a jail sentence can mean the difference between deportation and freedom.”
Under current immigration laws passed in 1996, even lawful permanent residents and refugees can be deported for certain offenses if they are sentenced to at least 365 days. Ramsey County Attorney John Choi’s office recognized this arbitrary “life sentence” for Phan.  In a letter to the Federal Immigration Judge who ultimately granted Mr. Phan a hardship waiver, Choi wrote, “I do not believe that deporting Mr. Phan to a country where he has never lived and whose language he does not speak is a fair or just consequence.”
Julie Mao, attorney from the National Immigration Project of the National Lawyers Guild, which supported the #ReleaseMN8 campaign’s advocacy strategy, said, “Mr. Phan’s release is the result of transformative community organizing that refused to resign to deportation, working in collaboration with dedicated lawyering. It shows that stopping deportations is possible even under Trump’s deportation agencies when communities organize, defend themselves, and engage the support of a local prosecutor.”
Quyen Dinh, the executive director of the Southeast Asia Resource Action Center, added, “Our prayers of joy are with Chamroeun’s family and the #ReleaseMN8 community for the long hard battle they’ve fought not only for their families, but for so many others who continue to live their lives in limbo and fear. We applaud County Attorney John Choi’s courage to stand up for Chamroeun by recognizing how our harsh immigration laws result in inhumane and unjust consequences for families. We call on Members of Congress to throw out these arbitrary laws that have caused so much pain for Southeast Asian American communities, so that more mothers and fathers like Chamroeun can remain with the families who need them.”

Phan reunited with his daughter