WASHINGTON, DC – The Southeast Asia Deportation Defense Network (SEADDN) has learned that US Immigrations and Customs Enforcement (ICE) has issued a notice for arrest to a Cambodian individual with an order of removal and may resume deportations to Cambodia and begin arresting additional people as soon as this week.

The Biden Administration put out a fact sheet last month celebrating their accomplishments and support of Asian American, Native Hawaiian, and Pacific Islander (AANHPI) communities. Included in that fact sheet was a commitment to “slowing removals to Burma, Cambodia, and Laos.” ICE resuming deportations of Cambodian community members is in direct contrast to the public commitment that President Biden and Vice President Harris made to AANHPI communities and, specifically, Southeast Asian Americans.

In 2017, over 100 Cambodian Americans throughout the country were rounded up and detained over a two- to three-week period. In 2018, ICE deported more Cambodians than in any previous year. When threatened with deportations, Southeast Asian American communities face undue fear and uncertainty around their future and their families’ futures. 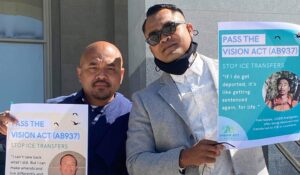 Deportations are state violence and another facet of anti-Asian hate. Two community members whose lives could be impacted by this decision to resume deportations to Cambodia are Chanthon Bun and Tith Ton. They overcame traumas and mistakes of their past and our communities now benefit from their incredible work as community advocates, organizers, and leaders.

In SEARAC’s series of anti-deportation PSA videos, Bun describes living with an order of removal as living in limbo. “For me,” he says, “the future is really bleak. I can’t plan my future.” He doesn’t know if or when he will be pursued for deportation, or if ICE may show up on his doorstep one morning to take him away from his family and his work in the community. “If we were deported, our family wouldn’t be as happy as they are now. We draw them together and the positive mindset we bring—that heals them and heals our community.”

If you or a loved one has a final removal order, keep an eye out for requests to report to ICE or ICE coming to their homes. Similarly, if you are in touch with anyone already in detention, you may want to let them know that ICE may try to remove them on the next flight. If possible, they may want to delay taking a removal order. If you need free legal assistance or support, call or text the Asian Law Caucus hotline at (‪415) 952-0413‬.

“Raids on Cambodian families are a continuation of decades of displacement, first from our home countries, and then from our homes in the United States,” said Nancy Nguyen, Campaign Director of the Southeast Asian Freedom Network. “For those of us who have rebuilt our lives here, deportations are violent. They are especially cruel during a pandemic, when ICE detention centers continue to spread COVID-19 both here and abroad.”

Nate Tan, Co-Director of the Asian Prisoner Support Committee, said: “The United States has a long history of criminalizing poor Southeast Asian communities. The Biden Administration is continuing a long legacy of separating refugees from their families. Deportation exacerbates systematic violence and trauma that the Southeast Asian community continues to endure.”

Join SEADDN’s national movement in our Week of Action to #StopTheRaids! We will be hosting a week of call-in sessions to demand that the White House and ICE stop separating families. There will be organizations from different parts of the country hosting virtual sessions each day as listed below although all sessions are virtual and you may join in any region.

More information, including a social media toolkit to promote the Week of Action, can be found at bit.ly/seatoolkit2022 and on SEARAC’s Facebook and Twitter.

If you can’t make one of the sessions listed above, call the White House today to demand that ICE not deport any Cambodian community members. Remind them that the Biden Administration has recently celebrated its accomplishments in protecting Asian American immigrants and refugees, and that the act of separating families and deporting community members is an unjust act of violence.

“My name is ____ from (city, state). I am calling President Biden to express concern over the planned deportations of Cambodian Americans. Many of these community members came to the United States as refugee children. Deportation is a double-punishment to individuals who committed crimes but have already served their time. They deserve justice and a second chance. Your administration recently celebrated that you had reduced deportations to Burma, Cambodia, and Laos during the first year of the Biden presidency. I demand that ICE reconsider these upcoming deportations and allow Southeast Asian Americans to remain at home with their families and communities.”