WASHINGTON, DC – Today, as the Supreme Court begins review of two cases on affirmative action, the Students for Fair Admissions v. President & Fellows of Harvard College and Students for Fair Admissions v. University of North Carolina, SEARAC gathered with partners in front of the US Supreme Court building in strong support of affirmative action and race-conscious admissions. We denounced efforts to end these programs as well as the shameful stunt of using Asian students as props to dismantle civil rights. We joined advocates and civil rights communities in urging the Supreme Court to uphold cornerstone civil rights policies to increase diversity and access in higher education. 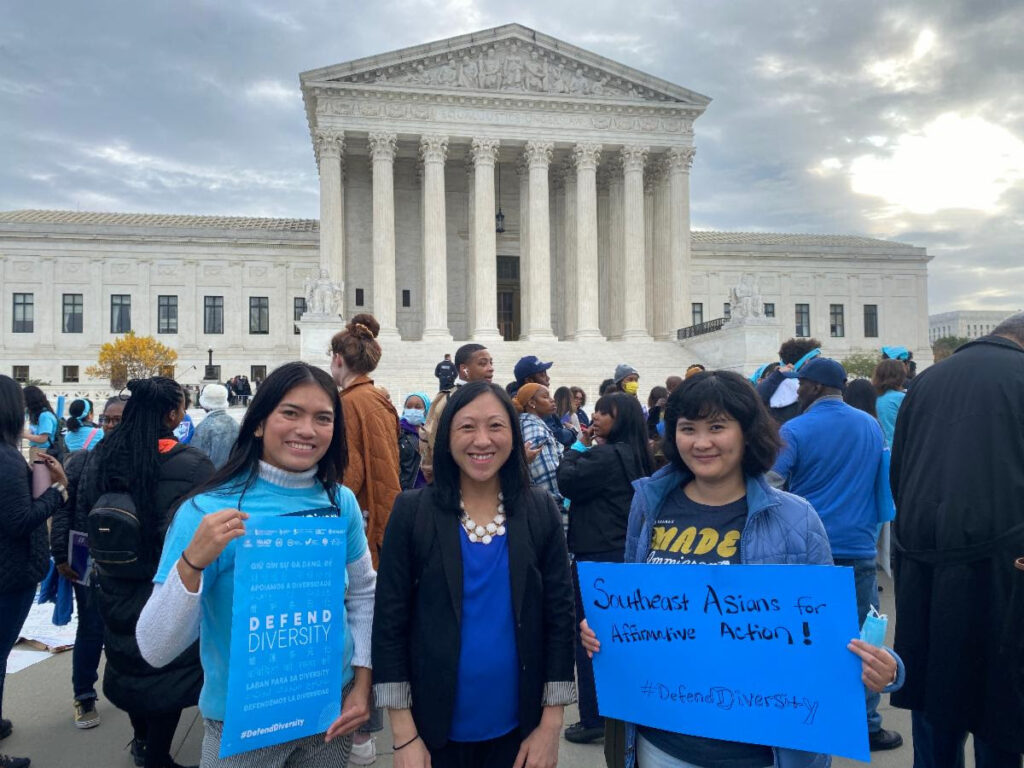 Despite previous rulings that uphold the use of race as part of holistic admissions, Students for Fair Admissions continues to use divisive rhetoric in its push for review of these two cases. There have been no findings of discrimination against Asian American, Native Hawaiian, and/or Pacific Islanders (AANHPI), and previous court rulings have rejected these allegations. The Supreme Court has set precedence by upholding affirmative action four times, validating the right to use race as part of the admissions process.
It is also important to note that Students for Fair Admissions is a group created and led by Ed Blum, who has made a career of opposing affirmative action. While this group’s rhetoric aims to divide the public on where AANHPI communities stand on race-conscious policies, 69% of Asian Americans are in favor of affirmative action programs designed to help Black and Latinx community members, women, and other underserved student populations overcome systemic barriers in pursuit of higher education. Affirmative action policies benefit AANHPI students by allowing schools to consider the broad range of a student’s background and experience. Roughly one out of five Asian Americans currently enrolled in elite colleges benefited from holistic admissions reviews beyond test scores. 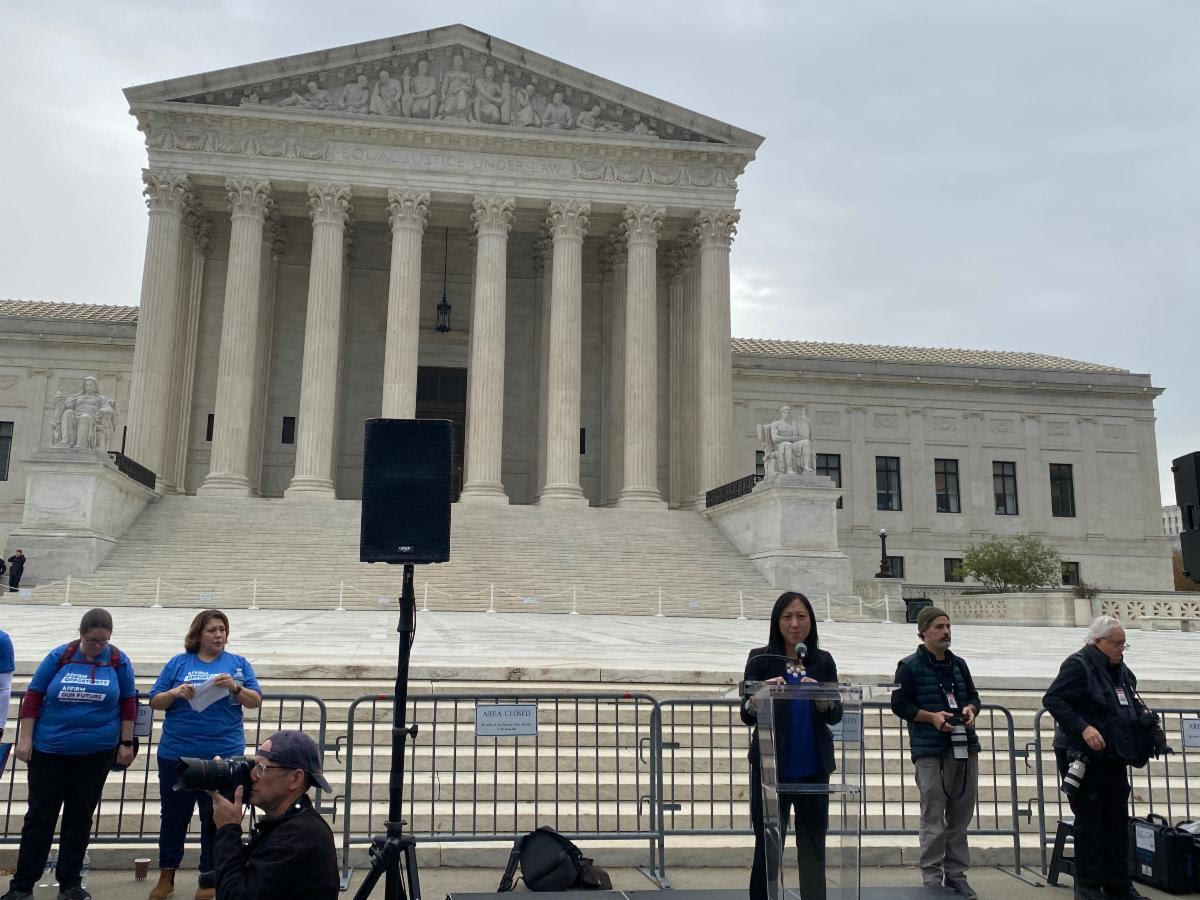 In particular, SEARAC’s previous statements on affirmative action highlight the benefits of this policy for AANHPIs and Southeast Asian Americans (SEAAs) specifically. Census data reveal that 68.5% of Cambodian Americans, 66.5% of Laotian Americans, 63.2% of Hmong Americans, and 51.1% of Vietnamese Americans have not attended college. SEAA students critically benefit from race-based, holistic admission policies, a fact that Students for Fair Admissions highlighted when the group excluded SEAA students from its definition of Asian students in a complaint against Yale’s affirmative action policy.
At today’s rally for affirmative action, Quyên Đinh, Executive Director of SEARAC, shared her personal story and uplifted SEARAC’s support for race-conscious admissions policies: “I, like many of you and Americans across the country, benefited from admissions policies that saw me as more than a number. Just based on my SATs and GPA alone, I would never have been accepted to the school of my dreams: UC Berkeley. I am part of the lucky few, blessed to be continuing my parents’ and community’s fight for freedom as the first in my family to graduate with a college degree. Today, in front of the Supreme Court, we are standing up and fighting for an America that defends diversity in college admissions so that my story is the norm.“
“We must uphold race-conscious policies that allow the entire experience of the student to be considered in the application process, including the very real impact that race, ethnicity, and gender have on an individual’s educational and lived experiences. Race-conscious policies increase equity in admissions for students of color who face financial hardship and other economic challenges, including SEAA students. SEARAC reaffirms our support for affirmative action and condemns efforts to end these civil rights policies.” 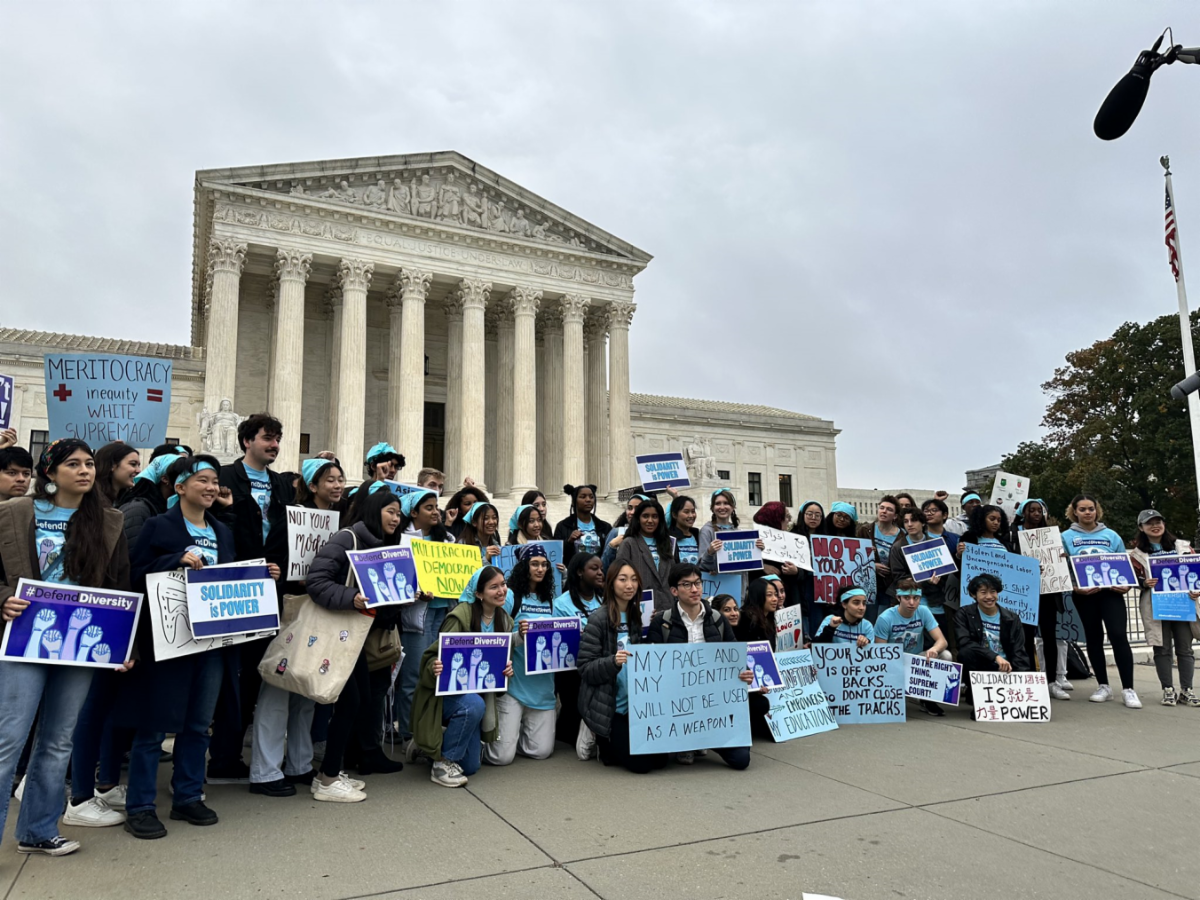 TAKE ACTION: Want to stay engaged with SEARAC’s efforts to support access to educational opportunity? JOIN US and get involved!