Washington, DC – On Tuesday, the Los Angeles Unified School District (LAUSD) Board of Education unanimously passed the “Everyone Counts: Increasing Equity for All of Our AANHPI AMEMSA Students and Employees” resolution. The resolution, authored by Board President Mónica García, makes LAUSD the largest school district in the country to disaggregate race and ethnicity data to ensure that all communities are seen and accounted for by policymakers.

The resolution, which is the product of more than 40 community organizations working powerfully for educational justice for Asian American, Native Hawaiian, and Pacific Islander (AANHPI) students, Arab, Middle Eastern, Muslim, and South Asian (AMEMSA) students, and all students of color, will:
“Disaggregating data is a civil rights issue,” said Quyen Dinh, executive director of SEARAC. “Without detailed data, Southeast Asian American communities are made unseen, and our needs are ignored in critical policy decisions. SEARAC applauds the Board of Education, Board President García, and the many community advocates who fought to pass this historic civil rights milestone. We now call on LAUSD to implement the resolution fully and expediently to make educational equity a reality for all students of color.”
While our country has made significant strides in collecting data about student achievement for the major race and ethnic groups, data policies in most states and districts continue to fail to represent our diverse communities accurately. The monolithic “Asian” or “Native Hawaiian or Pacific Islander” categories gloss over the immense variation in outcomes for different AANHPI ethnic groups, such as for Southeast Asian Americans (SEAAs). In the aggregate, only 14% of Asian American adults have less than a high school diploma. However, disaggregated data show that 34% of Cambodian, 30% of Hmong, 30% of Lao, and 28% of Vietnamese American adults have less than a high school diploma – twice the percentage or more of Asian Americans overall.
California is home to more than 1 million SEAAs, including more than 764,000 Vietnamese Americans, more than 118,000 Cambodian Americans, more than 101,000 Hmong Americans, and nearly 83,000 Laotian Americans. LAUSD alone educates 85,000 students-or 18% of the district-who are AANHPI. This incredible diversity underscores the absolute importance for education data to reflect all communities accurately. SEARAC thanks the LAUSD Board of Education and strongly urges districts nationwide to follow in its steps.

Washington, DC – The Southeast Asia Resource Action Center (SEARAC) alongside Asian Americans Advancing Justice and more than 60 Asian American and Pacific Islander (AAPI) groups and 25 professors, with Fox Rothschild LLP filed an amicus brief earlier this week in support of race-conscious holistic admissions at the University of North Carolina at Chapel Hill (UNC). Participants in this brief whole-heartedly attest that race-conscious admissions policies result in more equitable and integrated universities and enhance the educational experiences of all students.
This amicus brief opposes the lawsuit filed by conservative activist Ed Blum and his group Students for Fair Admissions (SFFA) to end race-conscious admissions at universities. In its briefing, SFFA suggests that in addition to whites, Asian Americans are also supposedly disadvantaged by UNC’s race-conscious admissions policy.
“SEARAC proudly stands with our AAPI community members today, to once again state our resounding support for race-concious admission policies that work toward racial and social justice for all students,” said Quyen Dinh, executive director at SEARAC. “Southeast Asian American students, like many students of color, continue to face systemic barriers to accessing post-secondary education. Instead of eliminating race-concious admissions policies that work to combat education inequity in institutes of higher learning, we must support these policies that rightly urge colleges to evaluate students holistically.”
The consideration of race in university admissions, one of many factors in the admissions process, has been critical for many schools to understand fully an applicant’s background and experiences beyond test scores.
“The data show that these policies help all students of color, including Asian Americans,” said Dr. OiYan Poon, assistant professor of Higher Education and director of the Race & Intersectional Studies for Educational Equity (RISE Center) at Colorado State University. “Removing the consideration of race in admissions would hurt the most marginalized of AAPI students and be detrimental to the educational climate and environment, from which all students benefit.”
Race-conscious admissions policies have been credited with negating the inherent racial biases of other admission factors, such as SAT/ACT scores. They are also a factor in creating more diverse student bodies on university campuses that more closely reflect regional or national demographics. Studies show that colleges and universities that reach the highest levels of diversity have fewer incidents of racial hostility. Students report having a more positive learning experience in schools with race-conscious admissions processes.
“Removing the consideration of race at UNC would be a disservice to all communities of color, including the diverse AAPI subgroups in North Carolina,” said Chavi Khanna Koneru, executive director of North Carolina Asian Americans Together. “Our state is home to significant ethnic minority communities from Southeast Asia who experience varying economic and educational barriers. Saying that Asian Americans are not underrepresented minorities at UNC only obscures the needs of underrepresented Asian Americans.”
“The growing Southeast Asian community in our state is not a monolith; each student deserves the holistic review long prized by our state’s flagship university,” said Matthew Nis Leerberg, North Carolina-based partner at national law firm Fox Rothschild LLP.  “We are proud to have had the opportunity to work alongside Asian Americans Advancing Justice to speak for that community on an issue critical to the future of our state and the nation.”

SEARAC stands firmly in support of UNC, race-conscious admissions policies, and all students of color. We will continue to fight alongside other communities of color for greater equity and justice in this country.

SEARAC advocates for affirmative action and data disaggregation, but what do these two policies entail?

We’ve broken them down in this brand-new education fact sheet. Have a look and learn more! 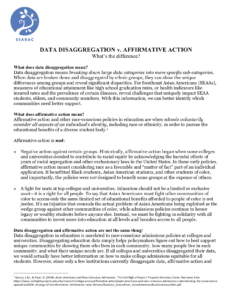 I learned to speak English twice a week during pull-out ESL lessons. It didn’t matter that I missed part of Kindergarten for it. I didn’t understand what was happening in the general classroom anyway.

By the next year, I was flipping through English chapter books. My mom majored in Korean literature and taught language arts, and she knew the success to learning was through the first “R,” Reading—even in this new country whose libraries and letters were foreign to her.

By 4th grade, my mom struggled to get me to read—but not in English. She used all of her instructional tactics on me. She made lesson plans, assigned me homework, made flash cards for Korean words and grammar. She had flown here with volumes of Korean histories and biographies and folk tales that she imagined I would read when I grew older, but I wouldn’t touch them. The letters looked weird (why were they so square?!). Instead, I buried myself in the adventures of children with names like Harry, Ramona, or the Baudelaires. Adventures written in letters that were once unknown to me.

Years later in college, I taught civics once a week to 8th graders as a volunteer. Three of my students did not speak English, while a fourth tried in vain to translate my haphazard lessons for them into Spanish. I couldn’t reach them—nor could their actual teachers. Like my teachers, including my mother, couldn’t reach me.

They cemented my commitment to learners. My education happened simultaneously, divergently, combatively, at school, home—in the pages of print I made my friends when I had few in humans. School was a site of contention, as was home. They didn’t talk to each other, they couldn’t talk to each other, and I doubt they respected each other too. When I led a classroom for the first time, I didn’t want a space of learning to be that way for anyone else, but that’s what happened, and, at the time, I didn’t know enough or possessed the training to have prevented that.

I’m at SEARAC now because I want to help change this. I want schools to be sites of contention because that’s what learning entails—learning is challenging ideas and growing from it—but not because schools cannot or blatantly refuse to teach students who aren’t “easy.” I’m at SEARAC because there shouldn’t have to be a tradeoff between the cultures and norms that young people embody at school and those they embody at home. I’m here because I fight for the rights of all students—English language learners, immigrant learners, refugee learners, low-income students, and students of color—who are unjustly unseen and underserved.