ACTION ALERT: Allow Laotian and Hmong families to reunite! Sign our petition to lift visa sanctions on Cambodia and Laos

SEARAC is calling on President Biden and the Department of Homeland Security (DHS) to take bold action to end the unjust deportation of Southeast Asian Americans. Our new petition, in partnership with the Southeast Asian Deportation Defense Network (SEADDN), demands that sanctions be removed against countries that have been deemed “recalicrant” for not accepting enough individuals to be deported. Sanctions are being used to coerce countries into accepting more deported individuals and are perpetuating the United States’ inhumane deportation machine. This must be stopped. 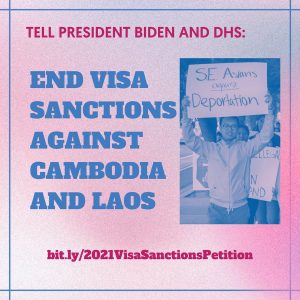 It’s been one year since the Trump Administration broadened visa sanctions on Laos for not complying with their 2018 demands to speed up deportations from the United States, establishing an immigration ban for Hmong, Iu Mien, and Laotians that continues to be implemented, even under the Biden Administration. These retaliatory actions followed a 2017 visa sanction on Cambodia, which increased removals of Cambodians by 279% and Vietnamese removals by 58% between 2017 and 2018.

The Trump Administration drastically increased the deportations of Southeast Asian Americans. During the Trump Administration, deportations of Southeast Asian Americans were at the highest they had ever been, even as community members were eligible for relief through a groundswell of family, community, public and congressional support.

“Despite public outrage over the deportation of Southeast Asian Americans and other immigrant and refugee communities, the Department of Homeland Security has not halted the separation of our families,” said Quyen Dinh, executive director of SEARAC. “Southeast Asian Americans continue to be torn from our communities because of unfair and inhumane immigration enforcement laws and visa sanctions that affect Southeast Asian Americans. Deportations leave long-lasting scars within families and communities. We cannot continue this cycle of trauma. Congress and DHS must focus on repealing the provisions of law and lifting visa sanctions that have expanded the United States’ detention and deportation infrastructure.”

In 2021, as we commemorate 46 years of Southeast Asian refugee resettlement and resilience in America, we call for humane and compassionate leadership that prioritizes the safety and civil rights for our community and country. It is time to repeal racist laws that devastate immigrant communities, lift visa sanctions that separate families, continue protections for our most vulnerable, and work towards transforming our legal systems to uplift the dignity of our communities.

Can you help us reach our goal of 1,000 signatures by July 6th? Sign the petition here.

Southeast Asian Americans impacted by final orders of deportation can use the resources below for help: